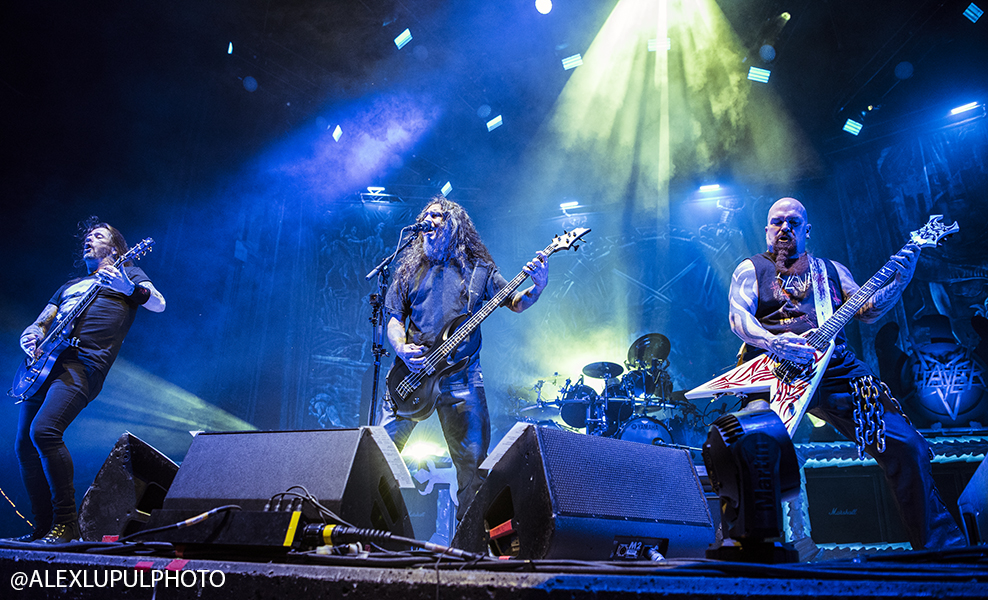 After more than thirty years of touring, recording and headbanging, Slayer has announced their retirement. But in true Slayer fashion, the band intends to go out with a bang instead of a whimper, plotting out a final world tour which spans 46 dates over four months.

The Budweiser Stage served as host for Slayer’s final performance in Toronto, with a sold-out crowd attending this must-see concert.

While a cool breeze could be felt throughout the open-air amphitheatre, that served as little deterrent to metal fans. One fan in particular, who was kicked out of the venue during Testament’s set, braved the cool waters that surrounded the venue in hopes of gaining re-entry to the concert. His efforts were ultimately unsuccessful, as the soaking wet concert-goer was quickly noticed and apprehended.

For those deciding against swimming, they were treated to a lineup filled with veteran metal bands.

Testament was the first band to take to the stage. For over three decades, the Bay Area thrash quintet has been performing with no signs of slowing down. The band performed tracks from The New Order, Dark Roots of Earth, Practice What You Preach and Brotherhood of the Snake, with their stage setup drawing from the latter of the four albums, with snakes emblazoned on their backdrop.

Behemoth, the only international group on the bill, were next to take to the stage. With heavy white face paint, the band members could easily be confused as White Walkers from Game of Thrones. Frontman and guitarist, Adam “Nergal” Darski frequently broke away from the confines of the stage to get as close as possible to the audience, leading the crowd in chants and leaving them captivated by his performance.

Anthrax, a card-carrying member of the “Big Four” (along with Metallica, Slayer and Megadeth) are one of the four bands that defined the speed/thrash metal genre and were the third band to take to the Budweiser Stage. A large contingent of fans could be seen wearing Anthrax t-shirts, understandably so given the massive following they’ve amassed over 35+ years. The band ran their set like a well-oiled machine, with all of the members in sync with one another as they bounded about the stage. Their set ended with the band leading the Toronto crowd in a rendition of “O Canada,” with the sold-out crowd more than happy to sing along.

Richmond, VA natives Lamb of God were the final opening act to perform. The band brought the crowd into a frenzy, as vocalist Randy Blythe encouraged the crowd to create a circle pit. Perched above the band on a raised platform, Blythe’s dreadlocks could be seen flailing about as he alternated between head banging and unleashing his snarling vocals into his microphone. During a quick break between songs, the vocalist spoke fondly of the city, recalling their first performance in Toronto at The Opera House.

Finally, it was time for Slayer to perform. A black curtain was drawn across the front of the stage, shielding any wandering eyes who hoped to catch a glimpse at the band’s stage set-up. Once the band’s four-member took to the stage the curtain fell, revealing stacks of amplifiers, and a series of flames that shot into the air. The heat of the flames could be felt far from the stage. The band delivered a tight 19 song set spanning across the band’s discography. After playing the final notes of their last song, “Angel of Death,” the band remained on stage. Vocalist/Bassist Tom Araya appeared to be visibly moved, thanking the crowd for their years of support. The band hasn’t played an encore this tour, and much like their set list, it appears that Slayer also knows the right time to call it quits.