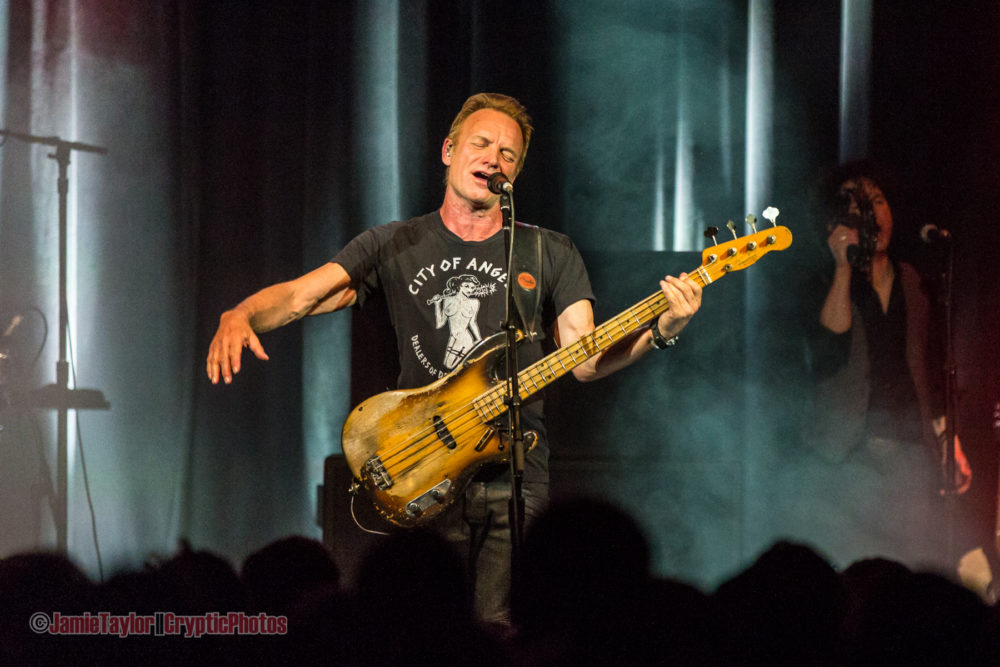 Last night, Gordon Sumner, a.k.a Sting of The Police, brought his current tour to the fabulous Commodore Ballroom in Vancouver in support of his twelfth solo studio release, 57th & 9th, which hit store and digital shelves on November 11th of 2016.

The compilation is an equal number of poetically touching and genuinely exciting tracks. For a man so far into his career, it is quite humbling to see that he is still able to put out something truly special.

Walking through the crowd at the venue, it was clear this was not your average Wednesday night gathering of concert goers. People were more repectful and dressed up. This was a special occasion.

As we stood in the dimly lit room and waited for the opening band to take the stage, the eager banter of fans twirled through the air. The room grew darker and a slow round of applause trickled from the audience.

To the surprise of all, Sting came out to open the show on his own. He sat down in a chair on the stage and a single spotlight illuminated him from behind as he pulled his acoustic guitar to his lap.

After some pleasantries, he delved into Heading South On The Great North Road. The delicate lyrics and intricate fretwork filled the venue and everyone in the crowd became still and quiet.

Mr. Sumner thanked everyone and then introduced the opening act, The Last Bandoleros out of San Antonio.

The tex-mex crew strolled out on stage with an ambitious energy. They had a captivating vibe that stirred people up and started them dancing and clapping along. I walked away wanting to know more about the band. After some quick digging, it was clear I was not the only one who loved their unique sound. Their name can be found on many articles about artists on the rise. Keep your eyes on these ones, they are doing something admirable.

Next up to the stage was Joe Sumner, son of Sting. He played two solo songs before re-introducing his dad and then fading into the back of the stage to join as backing vocals with the rest of the headlining band.

Gordon Sumner walked out carrying his big-well-worn bass around and now took the form of the rockstar. The stage was quite minimalist; just room for the band, their equipment, and roof-to-floor curtain as the backdrop.

Chatter was minimal as the slew of musicians on stage delved into Synchronicity II off The Police’s fifth album ‘Synchronicity’. The lyrics began and a sing-song ensued. The crowd worked hard to overpower the house speakers with their own overly-excited voices.

The entire musical faction was grinning from ear to ear in appreciation of their dedicated patrons. It took very little time for that ever-so-sepcial symbiotic relationship to form and both sides of the equation to start to building off one another. As the songs grew louder and more intense the audience reciprocated the same.

At the fourth song mark, the band jumped into One Fine Day which garnered a round of cheers. Sting looked out confidently as he uttered the political lyrics. Many in attendance showing their support by nodding approvingly as he sang.

The set continued on with a flawless unification of musicianship. This man, Mr.Sumners, has done a fabulous job of picking talented musicians to accompany him on stage. Be it the beautiful harmonies of the backing singers, the electric finger work of the rhythm and lead guitarists, or the deep, bold rapping of the drummer, it was all impeccably polished and refined.

About the midway mark, we began into Petrol Head, a track off the newest album. The song has a slightly grittier sound in comparison to the rest of the album and it had people dancing a little more aggressively. Soon the venue became a sea of outstretched arms as many patrons pumped their fists in time. It made a good turning point as the latter part of the night made way into tracks from the past.

First, it was Fragile off of 1987’s ‘…Nothing Like the Sun’ and then Message in a Bottle a song from The Police’s 1979 release ‘Reggatta de Blanc’. The latter stirred up the audience into a frenzy. People were jumping all over like angsty teens at a punk show. You could see how the songs affected people so personally. It was beautiful.

Most of the band exited the stage at the completion of that track, leaving Joe Sumner to sing solo again. He delivered a moving rendition of Ashes To Ashes by David Bowie. Just as the song started to close out, the remainder of the band came back on stage to take the track from an intimate moment to a powerful inclusion of all. A real celebration of the gone-but-not-forgotten Starman; Mr. Bowie.

As the night ran on we were treated to many of the must-haves that one would hope for; Walking On the Moon, Roxanne, Every Breath You Take, and Next To You. These selections closed out the night for the most part and left everyone wide-eyed and wound right up. The lady next to me jumped up and down as high as she could for the entirety of all four of those songs. Roxanne specifically stirred something extra special in her and everyone else, as the group spliced in Bill Withers’ Ain’t No Sunshine, extending the song out to near six minutes.

The band took a bow together and departed the stage.

Sting returned and said he wanted to close the night out with a soft song, just like how he started things off. He explained he had written this last song in memory of the fallen conflict journalist James Foley. The song was called The Empty Chair and was nominated for the 2017 Academy Award in Best Original Song category.

It was a wonderful way to summarize the night and finish everything off.

The song was delicate, personal, and emotional, and it pulled back the reigns on all that left over post-show energy, bringing us all back to down to earth.

As everyone filtered out of the venue I managed to snag a setlist.

Here is a more accurate breakdown of the nights set:

I walked a little slower than usual as I departed and thought about everything I had just taken in.

Sting and company were all on their game. They took a few songs and added some new elements to them.

The song selection was a great balance of new and old and managed to showcase the current album while ensuring the classics would get some play time.

It goes without saying that seeing an artist as huge as this at a venue of this limited of a capacity as this, that you would expect an intimate show but this was more than that. It was special in a way that I can’t seem to find the right words to properly describe.

It was a near perfect moment in time. One that was shared with a group of strangers that in that moment felt more like a tight nit family than you can imagine.

I would like to thank all the musicians and roadies and security and managers and everyone else that brought this tour to fruition. You should all pat yourselves on the back because you pulled it all off, and made it seem so effortless.