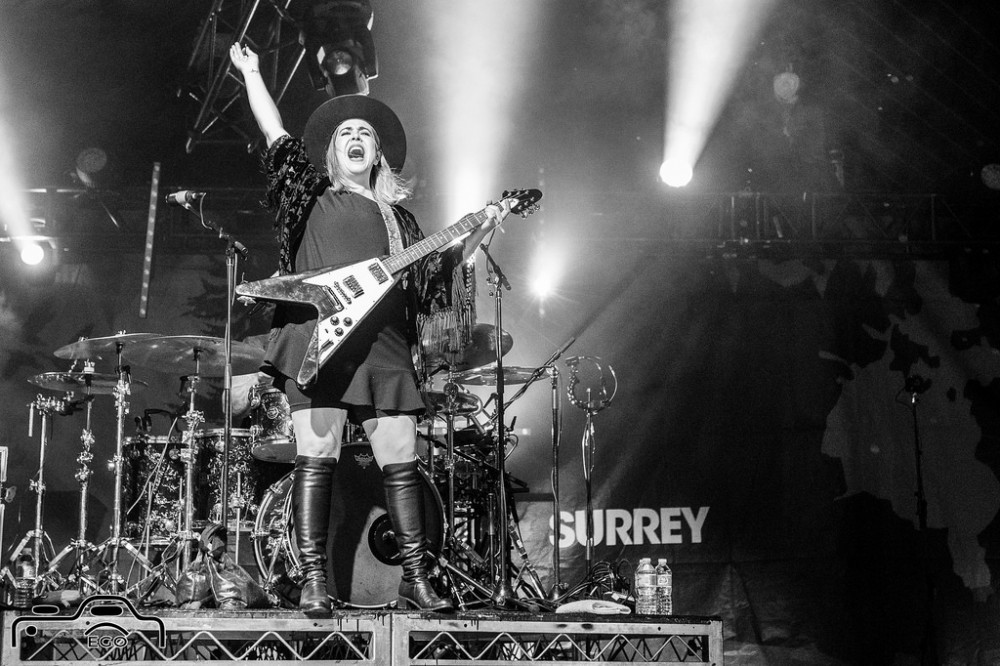 The rain and cooler temperatures in the morning didn’t dampen the Canada Day celebrations in Surrey.   Tens of thousands of people came out to the annual FREE day of music and activities for the entire family held at the Cloverdale Amphitheater.  This year two headliners to wrap up the day – Brett Kissel and Serena Ryder, with Toque getting the crowd warmed up.

The crowd started staking claim to their spots in front of the main stage just at the gates opened at 10 a.m. – some having arrived hours beforehand to ensure they were first through the closet gate near the stage … and by the time Brett Kissel was set to perform, it was almost impossible for anyone to move around.

“We were packed in though like sardines in the crowd” is how it was described by audience member Matt Taylor.  Despite the close quarters, everyone was being typically Canadian, friendly, polite, respectful, and enjoying the music and their neighbour’s company.

The evening began a little delayed due to technical difficulties, with Toque.

Brent Fitz, Todd Kerns, Cory Churko formed the band in 2012, initially as a one-off for a charity event in Winnipeg … but when these homegrown Canadian guys loved the experience – and Canadian music – so much, they formed their own all-star cover band … but they cover all of their Canadian favorites, not just one artist.

They’ve all had incredible success on their own, performing with the likes of everyone from Slash to Shania Twain to The Guess Who.  Fair to say they’re probably the biggest names in music ever to start a cover band.

Most of the crowd hadn’t heard of them … they were there mainly for Brett Kissel and Serena Ryder … but once they got started talking and playing, they had the crowd singing along to pretty much every song.

There were a few people in the crowd wearing Toque t-shirts who saw them perform a 2 hour set in Vancouver and changed their long weekend plans to make sure they could see them again as part of Surrey Canada Day!

These guys put on a fun-filled show and was a great way to lead off an evening to celebrate Canada’s 151st birthday!  Kudos to the organizers for the amazing line-up!

Next up in the line up was Brett Kissel.

Brett Kissel, put on an incredibly high energy and engaging show opening up for Serena Ryder for Surrey BC’s Canada Day celebration.  He had fans wait 10 hours out in the summer sun so they could have front row access.

Many brought signs as well … congratulating him on his anniversary, which is Canada Day … as well as a Canadian flag letting him know HE was their Anthem … a play of words from his song.

He performed standing on speakers and even jumping off the stage to climb onto the fencing up against the crowd.

After he wrapped up his set, the organizers of the event were brought out, along with Brett to sing Oh Canada.  He threw the crowd off for a bit because he sang the bi-lingual version.

… But that wasn’t all we saw of Brett … technical difficulties with Serena Ryder’s microphone at the start of her set forced them to stop performing … then it started to rain … a LOT more than the few drops that were sprinkled just before Serena was due to perform.  Brett Kissel comes running back out on stage and starts engaging the fans … live music sometimes has technical difficulties and weather challenges.  He asked everyone get out there phones and start live feeds to document it … then he had everyone turn on the flashlights on their phones and had them all sing Oh Canada with him again.

If you’ve seen Brett Kissel on stage, you can see why it’s going to be quite easy for him to ensure the record for most concert tour dates in Canada is not just broken but smashed to oblivion between his We Are That Song tour, festivals, and private events.  If you missed him for Canada Day, you have a chance July 7th to see him in Castlegar BC at the Kootenay Country Music Festival before he has  4 shows in 3 days during the Calgary Stampede but ONLY the July 10th show at Knoxville’s has tickets!   Right now the only other chance Western Canada has to see him live is in November when he’s back for part 2 of We Are That Song.

Serena Ryder played to an enthusiastic (although “slightly” wet) crowd at the Bill Reid Amphitheatre for Surrey’s Canada Day celebration.  Even though the day had several dark and ominous clouds overhead, the rain only started trickling down as they were setting up the stage.

Serena started, then stopped singing the first song part way through due to more technical difficulties with her mic … the band kept playing for a bit, hoping it was a quick fix, but it proved to be a bit more challenging.  Once Serena and her band cleared the stage, promising to come back as soon as possible, Brett Kissel came back as a guest MC of sorts.  He kept the crowd engaged and in high spirits as the rain continued – all while trying to help troubleshoot the sound challenges with front of house.

The VIPs, organizers, volunteers, and even a few security guards, were dancing in the rain along with Serena to wrap up the night