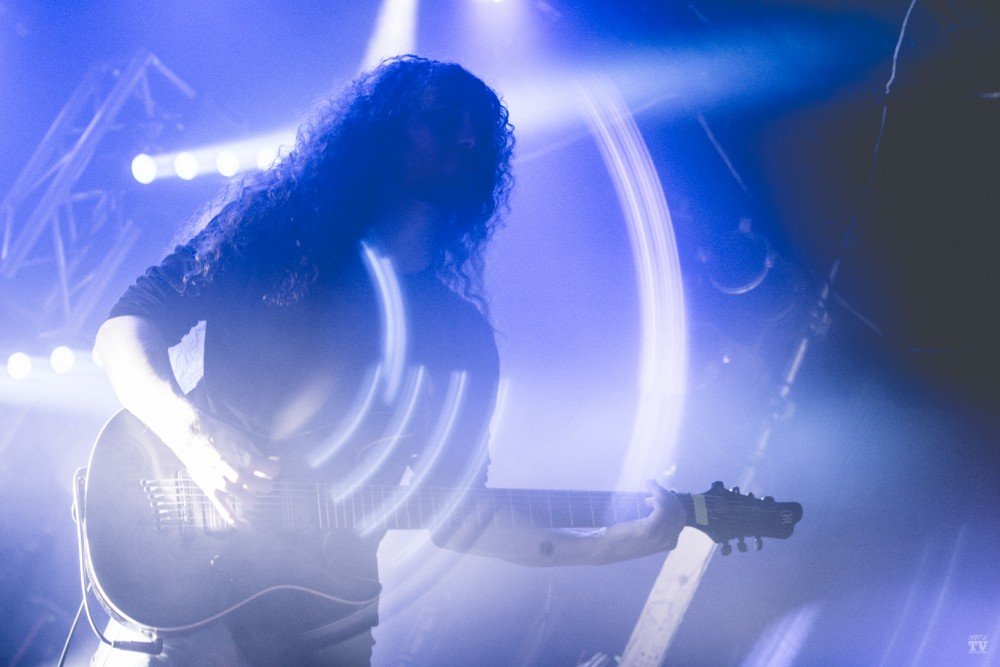 Tonight marks the final concert performance to take place in the Tivoli Theatre, Dublin before being levelled to make way for what I’m sure will be a lovely hotel.

Progressive metal juggernauts TesseracT, Between the Buried & Me & Plini are taking it upon themselves to get things moving – shaking the foundations of the theatre to its very core ahead of total demolition.

Making our way for the final time through its corrugated sheet metal tunnel entrance, lit in purple and blue hues, is a fitting way to enter into an evening of hypnotizing mechanistic music, as if venturing into the industrial zone within The Crystal Maze.

Sydney, Australia’s Plini (full-name Plini Roessler-Holgate) is first up, with the members taking to their instruments only to find them laced with slices of bread – resting gently on drum skins, atop amplifiers and guitar straps. Considerately passing the nourishing items to the crowd, Plini welcomes us to what is not only the final night of music in the Tivoli, but the final night of a European tour “with some crazy, hilarious people.”

Calmly gliding into “Cascade”, reaching the crescendo is like breathing in a cool arctic breeze, woven with textures of colours. The band, made up of Simon Grove on Bass, Jake P on guitar & TesseracT’s drum technician Chris Allison on (you guessed it) drums make for an extremely interlocked, tight unit. Playing their first ever show in Dublin tonight, after introducing “Flâneur” Plini delights us an stab at humour: “I’ve got something really exciting to tell you… merch, is upstairs.”

Allison on drums demonstrates some insane technicality behind the kit, feeling as if he is slipping in and out of the accustomed beat, but only in such a way to build up for the next seismic movement of the song. Closing tracks “Sunhead” and “Paper Moon” elevate the room to an oceanic quality, complemented by the occasional raptures of surf like quality in Plini’s music. The band appears to study one another deep in the grooves of “Paper Moon”, stoically, whilst members of the audience look to each other gasping, “Wow.”

With the audience’s attention captured and imaginations fed, BTBAM’s Paul Waggoner seizes the pit in front of the stage, armed with only a peeled banana, making his way along each member of the band feeding them but a bite of the delicious fruit, thus closing Plini’s short but memorable opening set!

Between the Buried and Me take to the stage shortly after, opening with the 13-minute operatic odyssey, “The Proverbial Bellow”, from most recent release Automata II. The technicality on display by this band is breathtaking, matched in equal parts by brilliant songwriting and showmanship. Like most of the North Carolina-based band’s consistent output, every track we’re treated to tonight features a seamless fusion of genre, style and time signatures. Following up with lead track from 2015’s Coma Ecliptic is “The Coma Machine”, unafraid to reach the same lofty heights of ‘epic’ set by their opening number and an opportunity to showcase much of frontman/vocalist Tommy G. Rogers’ wide-ranging vocal and keyboard abilities. Followed back-to-back with “Dim Ignition”, BTBAM are clearly keen to return to dazzling with some of their recent output next, with Automata I’s “Millions” being performed much to the absolute astonishment of the audience.

Behind a monstrous drum kit sits BTBAM’s Blake Richardson, who at times, caged in a sparkling chromium mechanism appears to operate like an automated, multi-dextrose, multi-limbed robotic bartender operating on overdrive. No unit of the kit goes untouched for any more than a few (varying beat) bars of a song, and with absolute brute force. To his left stands Dan Briggs on Bass/Keys and Guitarist Dustie Waring, all of whom completely and utterly tune in to the winding, adventurous passages of the music they have written and performed tonight, oblivious to much else, locked in with one another.

During crowd-pleasing ‘Sun of Nothing’ from acclaimed 2007 record Colors, Rogers and other half of BTBAMs guitar laboratory, Paul Waggoner, move along with the music in such fluid movements, with Rogers particularly, gently holding his microphone whilst releasing only the most guttural screams. As a bit of respite, TesseracT’s own James ‘Metal’ Monteith pays BTBAM a visit, running across the stage to offer a sip of a very tasty looking drink to Dustie, garnering a smile from all on stage and in the audience alike.

Closing the set with the delightfully insane “Voice of Trespass” our roadtrip through BTBAM’s Tron-like universe of twists and turns comes to an end. Indeed, a hint of sadness was detectable whilst their gear was packed away for the final time on this run.

A backlit palette of neutral colour washes the crowd from the stage, whilst pulses of ambient yet occasionally sinister sound echo through the halls of the Tivoli as TesseracT prepare to take to the stage. With the sounds building to an overwhelming level, met by an equally overwhelmed base of hardcore TesseracT admirers, the anticipation has clearly been too much for many, when the band arrive and mercilessly explode into “Luminary”. Met with a truly remarkable applause at the end, impossibly talented front man Daniel Tompkins recites, “That is the Dublin that I remember!”

Following up with a slew of TesseracT’s signature tracks; “Of Mind – Nocturn” and “Concealing Fate, Parts 2 & 3”, there is a sense of joy from many as British Prog-Metal Masters mark their triumphant return to Ireland. Closing what one could deduce was a wildly successful tour; the band’s latest release Sonder has been a surefire hit with old and new fans alike. Indeed, many of the highlights of tonight’s set are samples from this record and Polaris, not least of all ‘Survival’. Beginning with gentle yet purifying sounds emitted from Alec ‘Acle’ Kahley’s guitar playing, ‘Survival’ later builds to megalithic proportions, generating moments of sensational euphoria as it crescendos.

Drawing from Polaris again is ‘Dystopia’, bringing a completely engaged audience on a whirlwind adventure, tumbling down a mechanical vortex, landing at the bottom to find a twisted funhouse, effected greatly by spinning ribbons of light pouring out from behind the band onstage. ‘Dystopia’ and ‘Hexes’ demonstrate what a passage into madness with an industrial-like soundtrack could feel like, whilst being completely at the hands of the band.

Witnessing every member of the unit moving their hands in precise syncopation with one another, delivering seismic riffs and chugging is but a reminder of reality, that this sound is being generated by the men atop the stage in front of us. The music is complimented greatly by the flawless lightshow around us, perhaps a nod to say that this experience is very much an immersive one with the music at the forefront. Indeed the band remain largely enigmatic and anonymous throughout, rarely having their faces lit, except for drummer Jay Postones, seen through the mist and washes of light, focused and gnarled, snarling during every frantic fill and apocalyptic kick.

TesseracT’s sound ventures far from what many would consider standard “music”, but is able to transport everybody in this room to a completely different plain of existence. The band transcends the means of a regular concert experience. Their show is benefitted hugely too by an astonishing sound mix, making every single finesse available to each and everybody. But this masks one incredible aspect, only audible in the quietest moments of the show, which is that almost everybody is singing along in unison – every word.

An iteration of this tour will be making its way across North America in early 2019.