Indie electro-pop outfit The 1975 headed up their latest, highly-anticipated tour here in Belfast on Wednesday night. The guys’ latest album, A Brief Inquiry Into Online Relationships, is a more openly artistic effort on their part, delving into timely themes of disconnect in the digital age and the growing pervasiveness of technology in our lives with all of its implications. This tour, one that has promised to play out on a larger scale than The 1975 have managed to date, encapsulates these themes wondrously with its enthralling visual effects. The SSE Arena was transformed into a glowing feast for the eyes as the band had the nearly sold-out stadium in the palms of their hands.

The faint sound of someone tinkling on a piano was all that could be heard as the crowd eagerly awaited this, the first opening night for The 1975’s brand new tour. Without warning, the volume steadily grew—ten minutes before the band was due to begin—quickly warping and melting down, signalling the start of the show and taking everyone off guard. Floodlights flickered madly and extinguished, causing a sensation in the crowd, triggering everyone in the first dozen rows of the pit to whip out their phones to capture what was sure to be a grand entrance by the band.

The resulting effect that ensued was so perfect it was almost as if it had been planned: a hundred phones held up by extended arms illuminated in unison as they captured flashing white words on a black screen, lighting up the sea of concert-goers like twinkling stars. The words were the lyrics to The 1975’s latest album’s eponymous introductory track, which brilliantly (albeit somewhat incidentally) initiated the themes of the influence of screen culture in this generation that this tour has set out to explore. 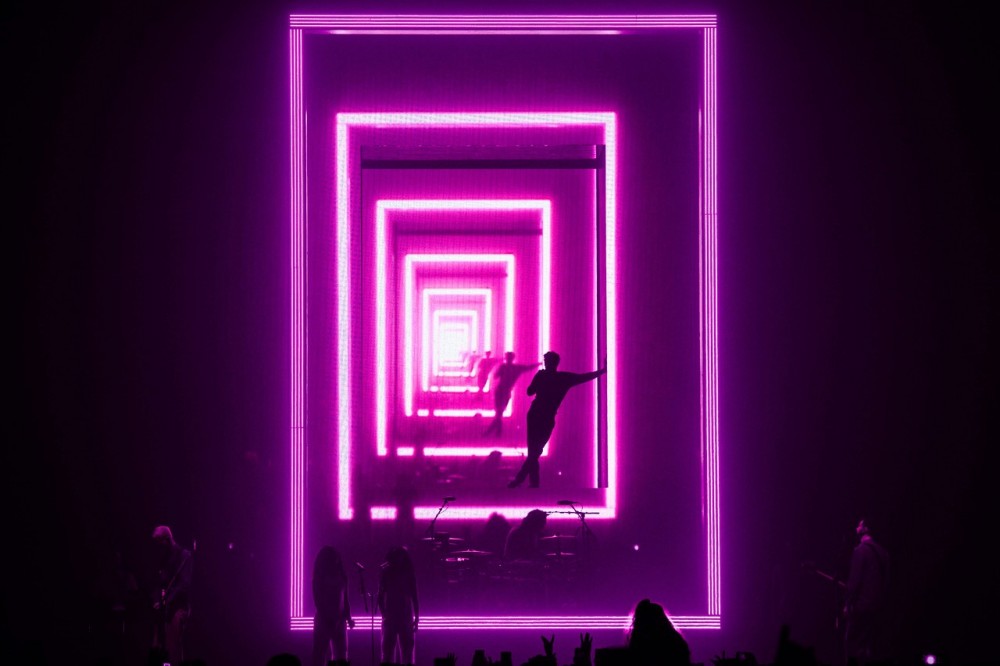 As the immersive lighting rig went berserk, the band came bounding onto stage, the lead singer Matthew “Matty” Healy mooching and waggling his track pants clad legs wildly, kicking things off with the album’s lively following track, ‘Give Yourself a Try.’ Two towering light frames bordered the stage, with a third descending from the ceiling at will to create various atmospheres for each song. Two large screens flanking either side of the stage unusually played not a straight feed but scrambled and distorted images taken from five cameras capturing the action, serving more of an artistic purpose than that of exposition. Right off the bat, it became clear that this was not your average pop concert.

The production of the show proved to be absolutely dazzling and wholly captivating from start to finish. I was delighted at the presence of backup dancers, later introduced as The Jaiy Twins, who grooved along in identical outfits to the Caribbean flair of massive single ‘TOOTIMETOOTIMETOOTIME’, and then to pretty much every song going forward without missing a beat. However, while playing host to such lively characters, the stage itself was also alive, morphing and transforming itself to fit each tune’s mood.

For the funky track ‘Love Me’ the stage became a disco nightclub as three gigantic cubes descended, creating a neon pink glowing ceiling for the band. But perhaps even more eye-catching than the scenery was charismatic frontman Matty, a positive ball of energy, who took every moment to peacock and make sure the crowd knew that it was really him, sarcastically taking up all the postures of an egoist pop star. With exaggerated facial expressions, howling like a Freddy Mercury clone run amuck, Matty was simultaneously basking in and self-conscious of his growing fame in his on-stage interpretations. This dynamic was so fascinating to watch unfold that it almost distracted from the surprisingly decent musicianship consisting of moody 80s synth, wahwah guitar soloing and a certain Bowie weirdness the culminated in an overall appealing sound.

A tremendous roar echoed at the first strains of smooth new down-tempo track ‘Sincerity Is Scary’ with Arctic Monkey-like articulation. For this tune, that playful stage revealed yet another one of its tricks: a conveyor belt the length of the front of the stage for the band’s hero to ride, prance and dance along for the duration of the show. To this track, Matty encapsulated a city stroll as apartment blocks rolled by in the background and the man took skipped along the treadmill, sliding sardonically from side to side with flair. The man was obviously stoked to be living out his best performance fantasies on this tour and doing it in style!

The show’s production upped the ante once more as Matty strived to visually depict our relationship with devices in the digital age during ‘The Ballad of Me and My Brain’. Static was projected onto the backdrop and Matty was raised on a posterior platform, all the while transfixed by the screen behind him. A truly trippy image resulted as he reached out to tap the screen which sent waves rippling and bending in all directions. Forcefully pushing back on the surface, Matty then sunk into a vortex within the screen (literally!) as physical box fell away from the surface and the man stepped inside, only to find himself trapped inside an iPhone.

Further reinforcing these dystopian themes, ‘A Change of Heart’ saw Matty hypnotized by one of the illuminated cubes gently falling from the ceiling, whereupon the eccentric singer took the opportunity to gesture to the audience to look at him, not at the cube, as if to remind them that experiences happen in real live and not through a screen. Then, for the live debut of ‘How to Draw/ Petrichor’, Matty plunked out the tune on a toy piano as background scenes of a serene country road exploded into scattering pixels only to reassemble into a string of disparate settings. As a shuffling electronic beat and all the buzzing tones of an overdriven compu-jam took hold of the track, the band meditated on the influence technology has to sway our perceptions of the world.

Delving deeper into A Brief Inquiry Into Online Relationships’ repertoire with ‘I Like America & America Likes Me’ and ‘Love It If We Made It’ however, it seems more and more that The 1975 is trying seriously hard to cultivate this image as this voice of political resistance and imbue serious meaning on somewhat shallow sounding songs. ‘America’ was an auto-tuned odyssey with non-sequitur lyrics that left me confused and the audience restless. Likewise, when you look a little deeper into the inspiration behind ‘Love It If We Made It’—refugees, Trump, and fake news—it is clear that Matty sees himself as a sort of soapbox poet of the digital era…but does it come off?

I can’t fault him for writing music where his interests lie, and am always excited to find musicians keen to embrace a social consciousness. However, watching and hearing these bouncy, over-produced pop songs unfold with flashing images of riot police and starving people in the Middle East—images that could have been taken out of a Roger Waters tour—the effect was somewhat jarring. With a quick scan of the room, looking at the demographic in attendance, one couldn’t help but wonder if Matty’s message was the motivation for the cheering crowd, or was is merely the man’s looks and catchy synth that appealed to the young audience? 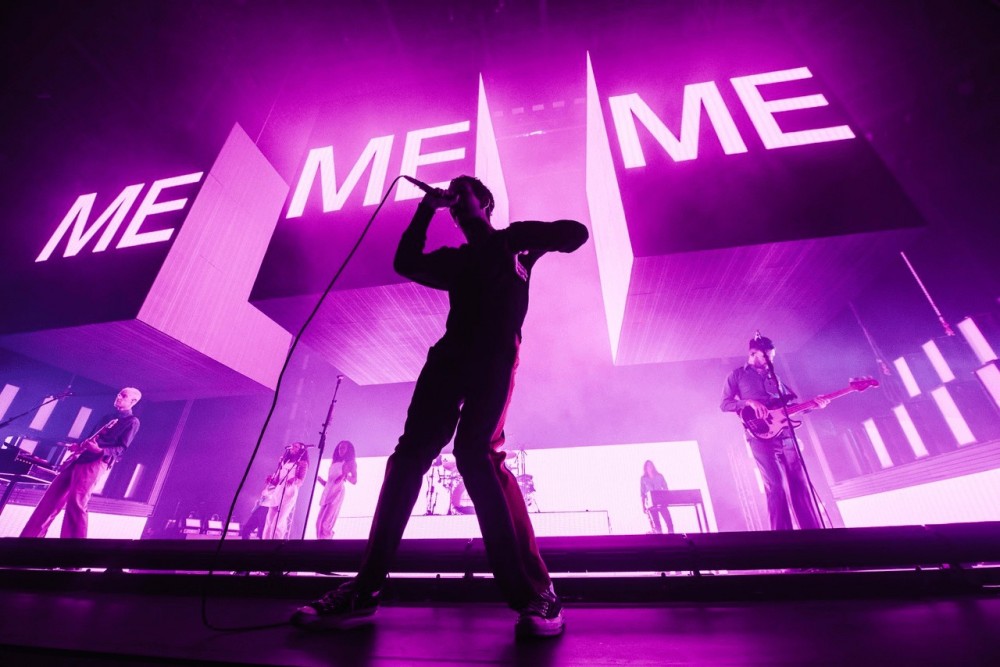 Of course The 1975 are no strangers to criticism on their musical seriousness and ability in spite of undeniable popularity over the years. Near the end of tonight’s set, Matty announced that we were “now getting into greatest hit territory,” and the guys proceeded to remind us just how they how they have earned their place in the alternative pop genre, rolling out ‘Girls’, ‘Sex’, and repeatedly played ‘Chocolate’.

Undeterred, this band has persevered in carving out a niche and a fan base across the globe. Not only that, but the band seems to embrace negative comments from anonymous critics on the world wide web, not only in their music video for 2016 anthem ‘The Sound’, but in the live performance tonight, as things like, “Is this a joke?” and “Do people really still make music like this?” flashed across the monitors during their performance. The effect was delicious, as these passing comments were rendered trite and meaningless when met with the rapturous roar of an impassioned crowd and thousands of fans singing along. Everyone is going to have haters, but the response here tonight showed that The 1975 have more than enough hearts, likes, and double-taps to make up for it.

If still you’re on the fence about this unconventional pop act, I would recommend listening a little deeper, never taking Mr. Healy’s lyrics at face value, and opening up your mind to the reality that this band could indeed mark a significant movement for music and social revolution. If nothing else, the stage production is so engaging that this alone merits the cost of a ticket. If you’re already a fan going into this tour, then there’s nothing to do but sit back, enjoy, and sing along at the top of your lungs.

Following this completely sold out UK & Irish tour, The 1975 make their way across North America. Catch this show on the following dates:

^ with Pale Waves
@ with No Rome

Encore
Love It If We Made It
Chocolate
The Sound
Sex