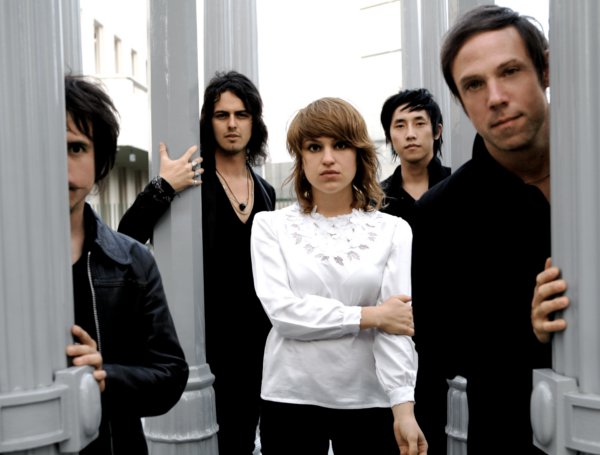 I absolutely relish any and every chance I get to see Airborne Toxic Event play. They are an indie rock band from LA, and have been a formalized group since somewhere between 2006-2008. They are less well known on the Canadian music scene, (aside from their popular hit, “Sometime Around Midnight”) however, they have a very diverse, dedicated fan base. If last night is any indication, it appears their fans also happen to be Queen fans.

As I waited for Airborne Toxic Event to take to the stage, I watched as fellow fans used the post opener pause to refill beverages. I was mildly paying attention to the background/“filler” music, until somewhat suddenly, the entire venue broke out into song. If I learned one thing tonight, it’s this: a random crowd of strangers signing Bohemian Rhapsody aloud with considerable passion makes for a superior concert crowd.

As the stereo music and passionate crowd-sung rendition of “Bohemian Rhapsody” came on an end, the lights dimmed and Airborne Toxic Event took to the stage. In a flash of lights and drumming they opened their set with the energetic “Welcome To Your Wedding Day.” Skillfully, they managed a perfect balance of fun and pure rock and roll genius as they invited crowd involvement with the chorus and slid into the crowd favourites of “Changing,” “Gasoline” and “Happiness is Overrated.” A number of times throughout the set, Mikel Jollett (vocals, keys, guitar), thanked the crowd and remarked on how this was their favourite Toronto show to date. A testament to just how engaging they are is that I actually was completely thrown off every time he said Toronto- I was so immersed in the set, the music, the performance that on multiple occasions I forgot that I am no longer in Vancouver and that yes, I am at a show in Toronto. Like Mikel, I was also really impressed with the fans in attendance. Everyone around me knew the lyrics to virtually every song and everyone there seems to be genuinely enthralled with the rock and roll experience. The newest addition to the band, Adrián Rodríguez (electric bass, backing vocals), channels Rock and Roll lengend Dave Grohl in an uncanny way- he is brilliant on the bass and is seamlessly integrated into the band. If you had not seen them play live before, it would be easy to assume he was an original member. With some bands I find myself having a preference for the first time I see them live because the experience is never quite as fresh as the first time and occasionally that band will cease to bring something new to the table with repeated concert experiences. With Airborne Toxic Event, on the contrary, they continue to exude an energy and happiness to be performing that is so very engrossing and so wonderful to witness that it’s impossible not to fall in love with their material and delivery each and every time. Some of the highlights from the night were watching Mikel Jollett joke with Stephen Chen admiring his fancy new guitar, seeing Mikel and Adrián join Daren Taylor on the drums, and watching Anna Bulbrook (violin, keyboard, tambourine, backing vocals) play tambourine while bending backwards over Adrián’s back as he continued to jam on the electric bass. The playfulness and fun they have while on stage together is intoxicating (pun sort of intended).

They concluded the night with a beautifully arranged five song encore, starting off with some slower ballads and ending the night with the same level of high energy they commenced it with. I left a happy fan/reviewer as they played my personal favourites: “Numb”, “All I Ever Wanted” and “Graveyard Near the House”. I would also like to extend a big thank-you to whoever approved/allowed me to review the show- especially for allowing me bring a friend! It was a wonderful treat to get to see a show with a new friend in this new city I find myself in. Thank-you Airborne Toxic Event for allowing the opportunity to ‘forget myself for a while’ in your music and performance.