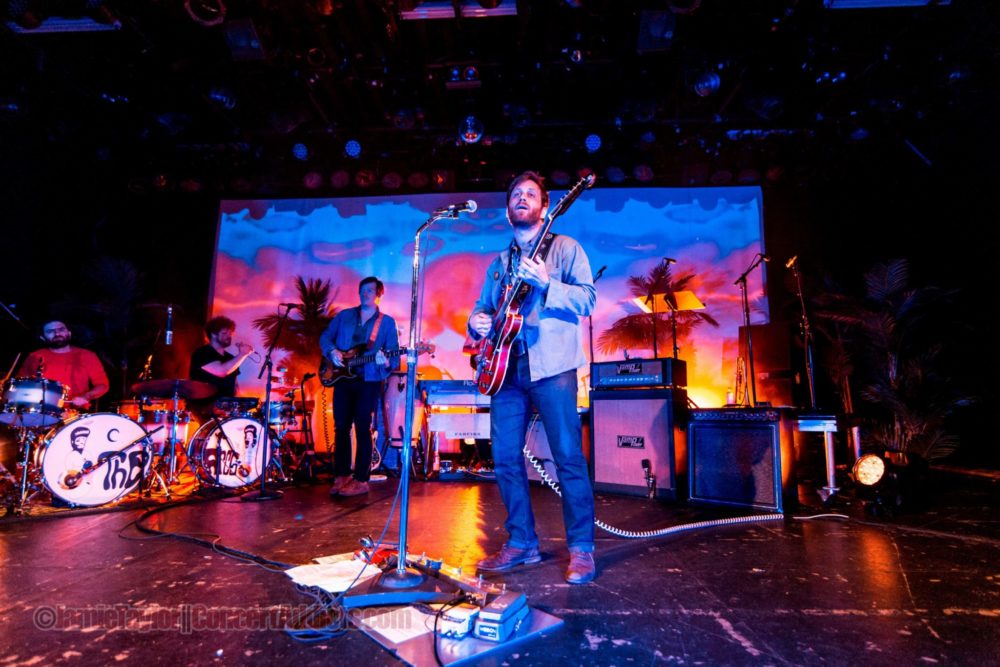 The Arcs, a new side project of The Black Keys’ Dan Auerbach set out on a warm-up west coast tour before hitting this year’s Coachella festival. While he made his fame with a 2-piece garage rock, with the Arcs are set out to accomplish something different. Although the structure and atmosphere of the band have digressed from the stripped down structure of the Black Keys formula, the spirit of the music is largely similar. Dan Auerbach and Patrick Carney built the Black Keys upon decades of hard work in dingy rock clubs; the Arcs’ starting tour at the illustrious Commodore Ballroom is a substantially different starting point.  Instead of the singular percussive support of Carney, Dan Auerbach’s new outfit features broad musical spectrum with the band, at points, growing to seven people. Guitar remains a central and driving feature but Auerbach’s guitar work leaves more space for auxiliary instruments and emotional contemplation compared with his previous work. On “Stay In My Corner,” one of the strongest compositions off of the group’s debut Yours, Dreamily , the song sauntered at a steady and imaginative pace, illustrating a power of diversity not as apparent in Auerbach’s work with the Black Keys. For a band on their first record, the Arcs have booked some major festivals; the band landed a respectable position on the lineup at this year’s Coachella not to mention a prime location at the upcoming Levitation Festival in Austin, Texas. The professionalism and proficiency of the band are beyond question. All of the players were more than capable. The succulent and gingerly bass of Nick Movshon, who also plays bass in the Black Keys, was a definite highlight of the evening. Half way through the set, the band was expanded with the added vocals of the all-female group Mariachi Flor de Toloache, who also doubled as the evening’s opening act. Their flavourful voices added a meaningful depth in the sublime sound of the Commodore Ballroom. The orchestration of the Arcs was refreshing if perhaps slightly over-produced; the extended spectrum of instruments ranging from pianos, keyboards and hand drums diverged from the average contemporary rock and roll set up. The band was certainly tight but it was easier to look at the band members as supporting musicians rather than included members of artistic partnership. Mr. Auerbach himself, however, was in good spirits, appearing very appreciative of the audience’s presence. His stage presence dripped with a sincerety that was not present during last year’s performance at Victoria’s Rock the Shores festival. Closing off their set with the lead single, Auerbach played with refreshing attention; the sonic edges of “Out of My Mind” were concise, clear, and particular. The crisp, sharp drums effectively exaggerated the song’s subtler details.  The audience were treated to a two-song encore before the band waved a sincere looking farewell. The Arcs’ performance at the fabulous Commodore Ballroom featured a capable band and front man execute a set of  moderately convincing songs. The band’s got chops but a rather limited catalogue that was only sparsely thickened with covers. While a few of the Arcs’ songs bubbled in the magic atmosphere of live performance, the project is in early days and seems somewhat unsure of its ultimate direction. Dan Auerbach looked happy and refreshed to be playing under a new moniker where he can explore new territory with his respectable guitar abilities; the hardworking musician deserves some compliments but the Arcs have yet to find to their ceiling.