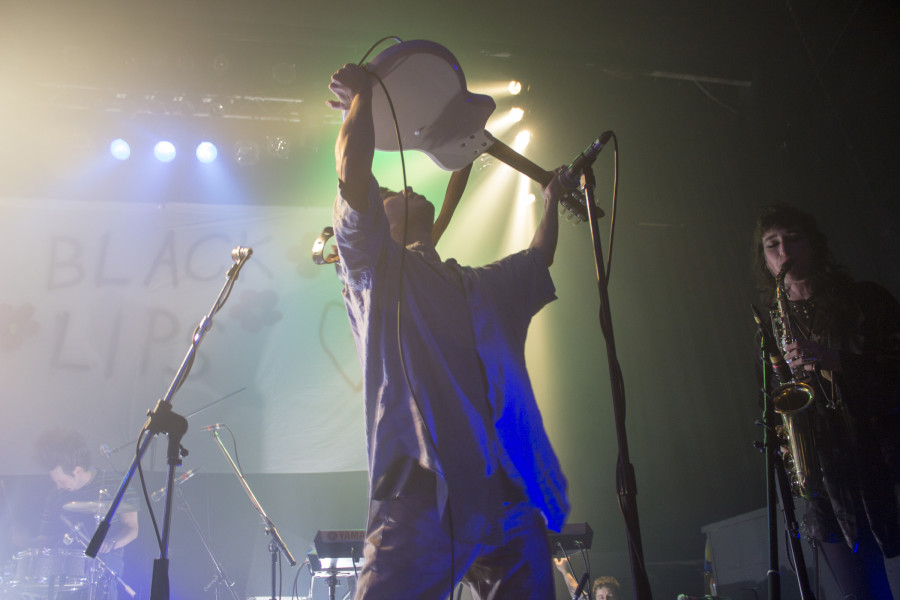 Cole Alexander raises his guitar to the punk-rock heavens.

Vancouver’s downtown east-side was treated to an exciting double bill of two immensely colourful groups, Atlanta Georgia’s Black Lips and Los Angeles’ Ariel Pink. This rambunctious co-headlining tour, the “Pink Lips” rewarded a packed audience with not one, but two solid psychedelic sets that made a spastic and memorable evening.

A crowd surfer during the Black Lips’ set.

The bands have been sharing the headlining slot each night of their jaunt; Vancouver was treated to the Black Lips first. Having played the Canadian North-West a few times this past year (Levitation Vancouver, Otalith Festival and a previous Rickshaw show), the music of the Black Lips  has even had a profound influence on the local Vancouver music scene.

Drawing a collective set from throughout their edgy catalogue, the Black Lips knocked “Sea of Blasphemy,” “Family Tree” and “Modern Art” just to get things started. If you’ve never seen a Black Lips show, it takes about a split second for the southern foursome to fire the crowd into a frenzy; they ride an energetic, all-out punk rock wave that folds up without the risk of falling even faintly stale.

Guitarist Cole Alexander, bassist Jared Swilley and drummer Joe Bradley switched off vocals after each song or two  and thus maintained the frantic onslaught by rotating between each singer. “Family Tree,” “Modern Art” and “Bad Kids” are penned by Alexander, Swilley and Bradley respectively. Many bands lack a memorable and original songwriter; the Black Lips have three.

Black Lips’ Cole Alexander demonstrates how to kiss a saxophone.

Beyond excelling at their flower-punk attitude, the band write some really killer songs that stand up under repeated scrutiny; they are simply masterminds at banging out a catchy, tune. “Funny” from Underneath the Rainbow has finally made it onto the band’s set with additional saxophone for extra kick.

At first glance at the stage setup of Ariel Pink, it was apparent that the group’s set which would be something of a trip. Coloured polka-dot stage props adorned the band’s gear, adding a  spacey atmosphere to Ariel Pinks’ off-kilter, sometimes glam-influenced psychedelic pop. Supporting his last record, 2014’s pom pom, Ariel Pink drew out many juicy, feverish and dramatic compositions. He played a few covers from his other backing band, Haunted Graffiti, as well as his on the mark cover of Donnie & Joe Emerson’s “Baby.”

Although the band took a little while to heat up, the finale of his set, featuring choice numbers like “Lipstick” and “Not Enough Violence” sizzled in their strange, perplexing auras as Pink provided particularly impassioned vocals. Pulling out “Menopause Man” from the most excellent 2010 album Before Today, Ariel Pink demonstrated experience and considerable rank as a modern psychedelic frontman. It would be difficult to consider Ariel Pink’s latest pop experiments anything but a success. Overall, Ariel Pink proved himself a more than capable songwriter, performer and frontman.

An overflowing Rickshaw Theatre shows their love for the Black Lips.

The Rickshaw Theatre is known for being something of a rowdy place. Stepping over spilled drinks and mountains of flattened beer cans, it looks like the crowd enjoyed themselves. When the Pink Lips tour came to town, East Vancouver puckered right up for the kiss.