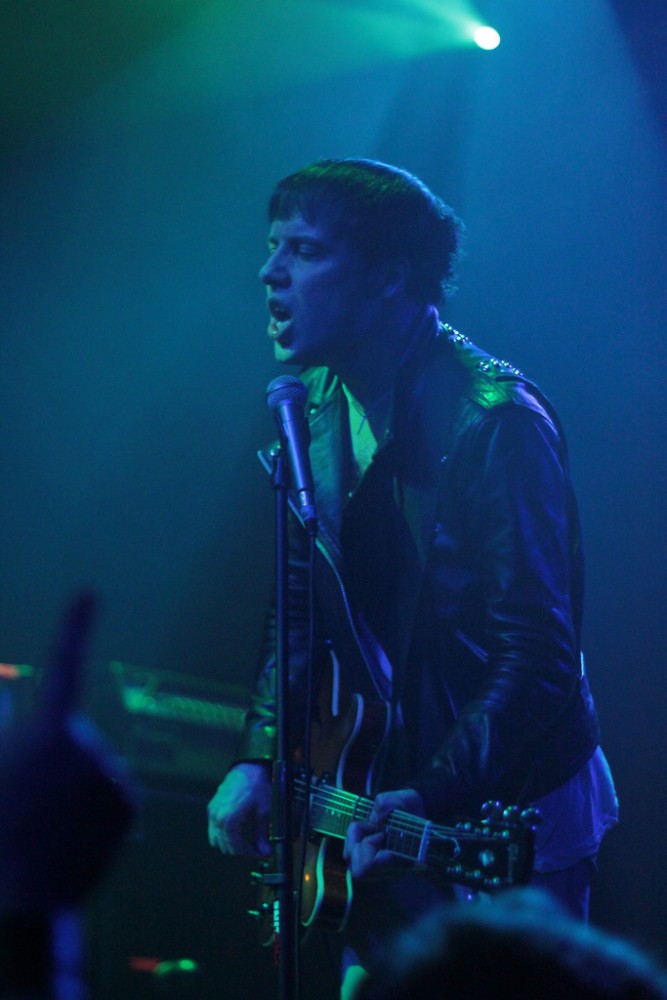 The living entity that is downtown Vancouver was awoken from its slumber last night. The Cribs, the four piece indie ensemble from West Yorkshire, gave a powerfully explosive performance to an eager and diverse crowd. Opening the show were Elizabeth, a local Vancouver band. Their sound and style, had the house rocking within moments of taking the stage. The evening played out with a sense of perfection. There was no over the top 6 song encore, nor was there any extensively dragged out jam sessions. Both bands played amazingly aggressive sets, and left it all on the stage. This was the way music was intended to be played, with passion, energy and sans-ego.

Walking into Venue, there was a sense that people were disappointed from the get go. Hanging on the door was a sign advising that due to certain unresolvable issues Jemina Pearl, the intended opener, would not be playing on this fateful evening. With such news the attendees of the event were disappointed they might have to wait 2 hours for any musical entertainment to begin. The melange of music fans in the crowd, varied only in age and clothing styles. Overall they all seemed to be the no-longer-rare audiophile types. Who have an uncanny ability to sniff out amazing bands before they reach superstar, and super popular status. Having this many buzzing around a show is a major indicator of the hype for any given band. Let me tell you, this venue was swarming with them.

Sitting beside the stage waiting for a band to come out and please your ears, is a terrible feeling. You wait and wait, expecting every shift in the lighting and every body entering from the rear doors to be an indication that something will take place in the near moments. This was the way the evening was playing out last night. When suddenly the stage became a live with activity. The local boys in from Vancouver known as Elizabeth, took to the stage. A quick moment to tune and the band was off, filling our anticipatory ears with pleasurable riffs.

It was a nice surprise that the opening act was replaced. The stage was exploding from the get go with a sort of reggae styled, punk influenced, alt rock. Reggie Gill on vocals, seduced the gathered mass at his feet with an aggressive vocal set. On the drums, Paul Gill, showed an amazingly skilled style, of precision and emotional attack. The bassist Rory and Davor on guitar were not shabby in the least, each had a deep rooted ability in their respective instrumental pieces. Each member of this band meshed so well it was a seamless display of music in its purest form. Nothing was overdone, or over taken by pop driven visions, it was pure and raw, and it was full of exciting energy. Looking around the venue, it was easy to see the musical venom this band had was working its was through every one in attendance. Elizabeth has such a matured sound, they are a definitely doing it right. Get out there and see this band, they are worth every penny.

Waiting between acts is also a painful experience. Most overcome this tedious time with alcohol or nicotine. Soon enough the lights dimmed and once more the venue erupted with cheers. The four shadowy figures emerged from the blackness and climbed to the stage. A series of blue and green house lights washed over the crowd. The Cribs took no time to dive into their 80 minute set. Ryan Jarman had destructive and mesmerizing vocals prowess. He attacked the mic like a man possessed, spewing forth raw emotion. With his battered leather jacket, torn white shirt and tattered jeans he brought visions of 80s punk to life. The spellbound crowd watched in awe, like statues they stared in amazement. It didn’t last long, soon enough the floor was slithering with the rhythm of this dirty post punk display.

[singlepic id=959 w=320 h=240 float=left]The band is mostly a family affair featuring the brothers Jarman. That is except of the latest addition to the roster, Johnny Marr. The former Smiths guitarist checked his ego at the door though. Each song is highlighted with the patented Marr guitar sound. Never at any point is he over bearing and takes over making it about him. During the performance, he was playful and cheeky with the fans; tossing smiles to those seeking his attention. Johnny has a certain simplistic complexity to his guitar work. He is able to take the complexity of a guitar solo and make them attainable within the song it self, no separation required. The fluidity between the band members is uncanny. You would think Mr.Marr would have been their blood brother with the connections visible on stage.

During their performance of Be Safe, a 15 foot by 15 foot video screen dropped down. This spoken word piece was read allowed by a gray haired gentleman on the video screen. All this while the band played the tune and sung the accompanying vocals. It was a great rendition and beautifully orchestrated. The band played out the rest of their power packed show, the floor bounded with the beat. Finishing up the set, each member slapped at their instruments like angry simians. Then placed their instruments on the stage and promptly took to the rear exit.

The show was quite simply one of the best vibes to a night in Vancouver I have felt in some time. The overall reaction was that of fulfillment. It was like being apart of something true, and real and new all at the same time. The Cribs are a band to keep an eye on, they are sure to turn many heads. You better make sure that one of those heads is yours and you are the first in line yo buy a ticket. The Cribs are a part of the new trend of a great new hope in the music scene. They are music reborn.