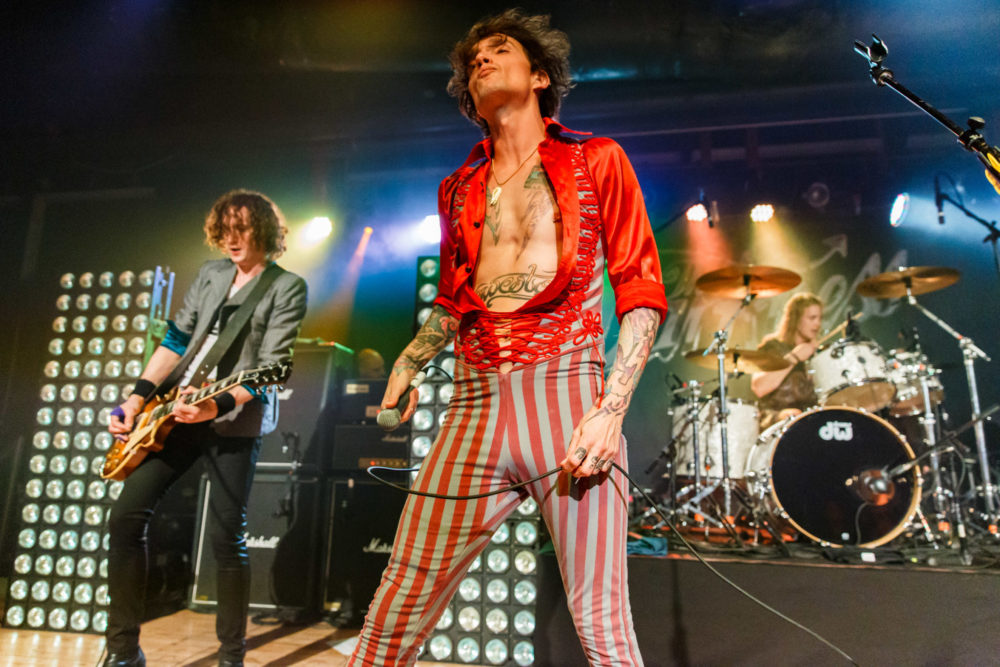 Nearly everything about British glam rockers The Darkness feels like a throwback – from singer Justin Hawkins’ falsetto shouts to his brother Dan Hawkins’ hard rocking guitar licks to bassist Frankie Poullain’s paisley shirt and afro. In a music world ruled over the last few years by Mumford and Sons sound-alikes, there’s something refreshing about a band that still knows how to simply rock out. The band played off of this fact with the title of last year’s Last of Our Kind, their fourth album. The band did a US tour last fall to support its release, and quickly returned again this year for a second round of dates, dubbed the “Back to the USSA” tour.

On Saturday evening, the band came to Baltimore, the day after having had to cancel a show in Indianapolis due to Justin Hawkins being treated for a throat infection. That might have caused some trepidation for fans going to the show – Hawkins’ vocal acrobatics can’t be easy even when he’s in top health – but as it turned out he was in fine form, and the experience was everything that the audience could hope for. If Hawkins was still feeling ill at all, he wasn’t showing it for the hour and a half that he spent on the stage.

Even though the band is touring behind a new album, their debut album Permission to Land, from 2003, took center stage, making up over half of the setlist. The band opened the set with new song and album opener “Barbarian,” but then immediately went all the way back with “Growing On Me,” the second single from their debut. The setlist then mostly alternated between Permission to Land and their later albums. New song “Mudslide” was followed by “Black Shuck,” and another new song, “Roaring Waters,” was followed by “Givin’ Up.” The band didn’t forget their intervening albums, though, including “One Way Ticket” and “English Country Garden” from 2005’s One Way Ticket to Hell… and Back, and “Every Inch of You” from 2012’s Hot Cakes. Several of the band’s most popular tracks from the debut, including “Get Your Hands Off My Woman” and “I Believe in a Thing Called Love,” rounded off the main set. The band returned for a two song encore, performing “Concrete” from Hot Cakes and “Love On the Rocks With No Ice” from Permission to Land, with Justin Hawkins singing while riding around the room on the back of a security guy.