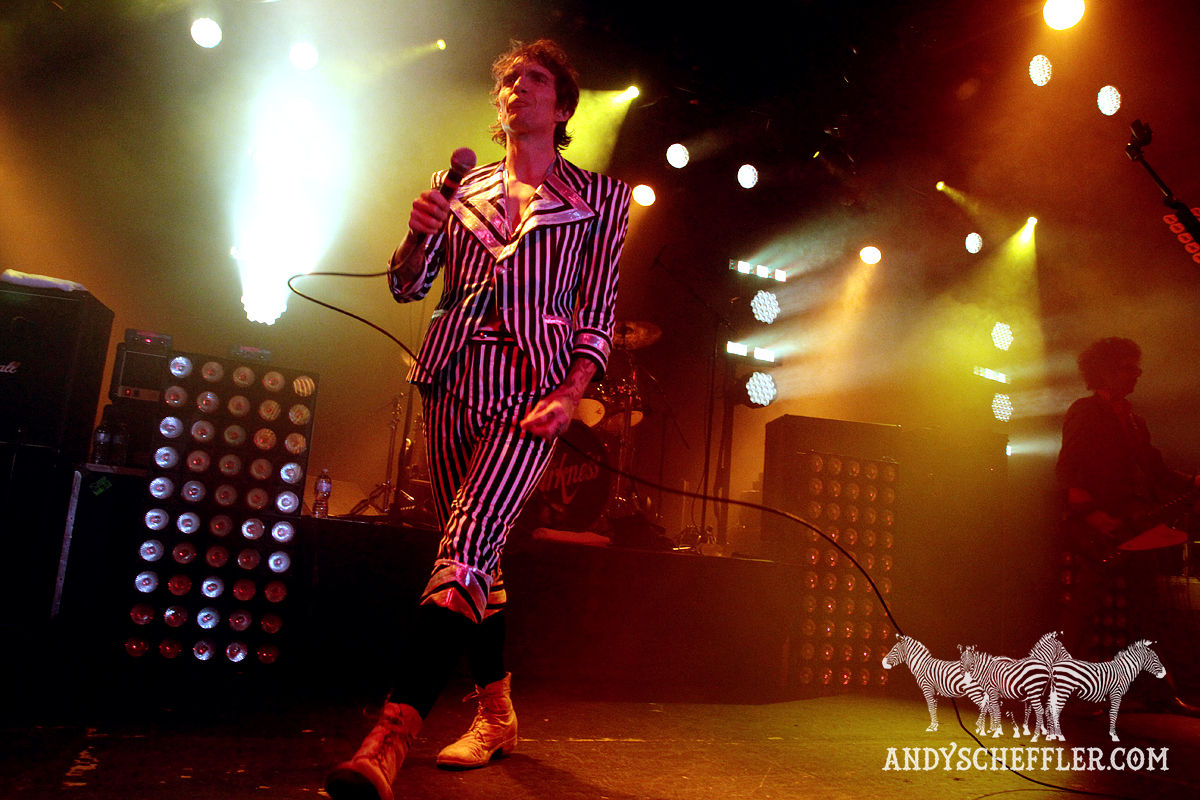 Waiting around in the photo pit for The Darkness to hit the stage, I can already tell I’m about to be blinded. Big light banks and rotating spotlights lined the stage, pointed directly out at the waiting audience. Somehow straddling the line between a kitschy 70’s glam rock parody band, and a flat-out, honest-to-goodness loud rock band, they attracted an audience tonight that reflected that gamut, from guys in afro wigs, handlebar moustaches and glittery shirts open to the navel, to hardcore rock chicks who were in their own spacey little thrash-dancing world and back again. Finally, the lights fell, the crowd stirred, and out came The Darkness, bedecked in a flamboyant array of shiny, stripey, vintage and loud clothing and accessories. I was a bit surprised to see lead singer/guitarist Justin Hawkins had cut his famous hairband-long locks in favour of a shaggy Caesar cut (after a brief evil-magician period it seems), but he was still wearing an outfit from an Oompa Loompa nightmare, so we were almost on track. Within the first handful of songs, Hawkins had steadily removed portions of his outfit until he was left rollicking around bare-chested, showing off his array of tattoos. There’s not much better a way to describe the show as just plain-out fun. These guys are tearing all over the stage, teetering on the edge, jumping off speakers and drum risers, anchoring themselves on the monitors and being so energetic, it was hard to know just who to focus on at any given time for fear of missing something bananas happening on the other side of the stage. You rarely see a crowd so engaged and enthusiastic. No judgey, back-of-the-room arm-crossing head-nodders here. People were howling along with Hawkins’ rock falsetto, fist-pumping and arm-waving from the word go. Crowd surfers did make an appearance eventually, but much later than I imagined. Even the sound guy, who I was hanging around right behind with a grand vantage point to the stage, was having a blast rocking out in his booth.

Some of Hawkins’ earliest remarks had to do with him being tired of the internet, and some guy who had commented somewhere, “Why do The Darkness play such old songs?” His answer…”cuz they’re f*cking awesome!” Hawkins is the banterer at all times and he is quite a character. Dan Hawkins, his brother, is of course on guitars, but be advised, any time I mention ‘Hawkins’ in this review without a first name, I am referring to Justin. Bassist Frankie Poullain was outfitted in a 70s style suit with a matching moustache and voluminous hairdo. New drummer Rufus Tiger Taylor, son of Roger Taylor, the drummer for obvious-influence legends Queen, has taken up the task beautifully. I’ve read that Hawkins had to do a bit of enthusiasm-curbing at Taylor’s arrival, being now one step closer to his own idols. Anyhow, the band, if you listen up, put together some properly good rock songs. Sure, they are intermixed with over-the-top tunes as well, but they are talented, and most definitely entertaining. They are tossing picks out into the audience almost every song. Poullain was introduced by Hawkins as the ‘special bass man’ and then encouraged some fanfare as he hung over the edge of the stage with the almighty cowbell a-clanking for the song “One Way Ticket.” When he was finished, he pitched the drumstick out into the crowd as well. All this time, Hawkins is intensely glaring around the room, big sparkling eyes and sauntering around the stage with such flourish. The song ended with an enormous all-in clapalong. A stage tech popped out during one song to fix something, and as he was trying to scurry off the stage as unobtrusively as possible, Hawkins grabbed him in one-armed hug around the chest and wouldn’t let him escape as he continued to sing. The tech looked baffled and cracked up.

Even Taylor got in on the action. Not one to be left out of all the activity by the more mobile members of the band, he took the opportunity to jump OVER his drum kit onto the stage and run around briefly. Hawkins gave another bantery interlude between songs by introducing Taylor as, “That man who just leapt to his certain doom,” and made mention of how he is equally talented with both his hands and his feet. Hawkins went on to give some love to Vancouver, which they played last with, “one album less and a different drummer.” He said it was their highlight of the North American tour that year, and this one was shaping up to be the same. While this was happening, a keyboard was being positioned on the stage, and Hawkins effortlessly transitioned to this instrument as well. And here is also where our first crowd surfer made an appearance. Perhaps everyone was just waiting for someone to break the crowd-surfing ice, because it continued to happen pretty regularly after that. The crowdsurfing did not escape Hawkins’ attention, who afterwards pointed out those who, “fling their lifeless bodies into the pit…of despair. Now I dedicate this song to anyone who has had a dream. Not necessarily an ambition… just a dream.” They started into “Every Inch Of You.” Some guy ran headlong into the audience holding no less than six bottles of beer up over his head as he disappeared into the throng. The people are partying tonight. Hawkins does display some pretty brilliant guitar-player faces, but for some reason he just came to that self-awareness, and afterwards described an internet video he had seen where a fellow was sat on a settee like in his bedroom or something playing guitar alone and making these faces. “And I just thought, ‘thank God that’s not me.’ I have just realized I have become the man in that internet video, so thank you for inspiring me to make that face […] We are running out of time, so this next song I am going to abbreviate to ‘Woman’ so as to save time.” Cue the massive cheers as they hauled out their massive 2003 hit “Get Your Hands Off Of My Woman.” Hawkins had grabbed the whole mic stand to go running around the stage as he hollered through that tune, which apparently was not the intention. After, he paused to muse, “Who does this remind you of? I was trying to get the mic out of the clip . I reckon this is how that whole Bon Jovi thing got started, as a simple mistake.” He thanked his band again, but also gave a shout out to the security forces up front, “keeping you safe. But having said that, if you don’t dance to this next one, they’ll come over there and punch you in the face.” And so they ended their main set with their other big 2003 hit, “I Believe In A Thing Called Love.” Cue the bonkers once more.

The crowd was definitely not leaving without an encore, but the band kept them waiting a few minutes more than usual for it. The reason for this seemed to be revealed when they did pop back on stage and Hawkins was now outfitted in white short shorts and a Thin Lizzy t-shirt. The middle of the encore was occupied by “Street Spirit,” possibly the most unlikely cover song ever created, but it works surprisingly well dolled up in The Darkness style. Hawkins’ massive wail during the faaaaade ouuuut agaaaaaain lines is impressive. Generous reverb is added to this to make it sound like it’s being hollered down the length of a cave. The encore ended with “Love On The Rocks With No Ice,” during part of which, the band seemingly had an onstage version of Simon Says, performing aerobics-like arm gestures for the audience to mimic. The extended outro featured Hawkins clambering onto the shoulders of one of the security guards (who had told us this was going to happen while we were in the pit before the show began), who then paraded him around the room through the crowd while he still played guitar… normally, then behind his head, then aloft… as the crowd surged around him taking cel phone photos and high-fiving or fist-bumping him where possible. As he was transported back towards the stage, he started grinning ear to ear, holding his arms up and shaking hands all the more. Once back on the stage, there was an arm-in-arm bow to end the show, and Vancouver was once again lauded as a great place to be. “You are our favourite thus far, so well done.”

Interacting with the audience © Andy Scheffler