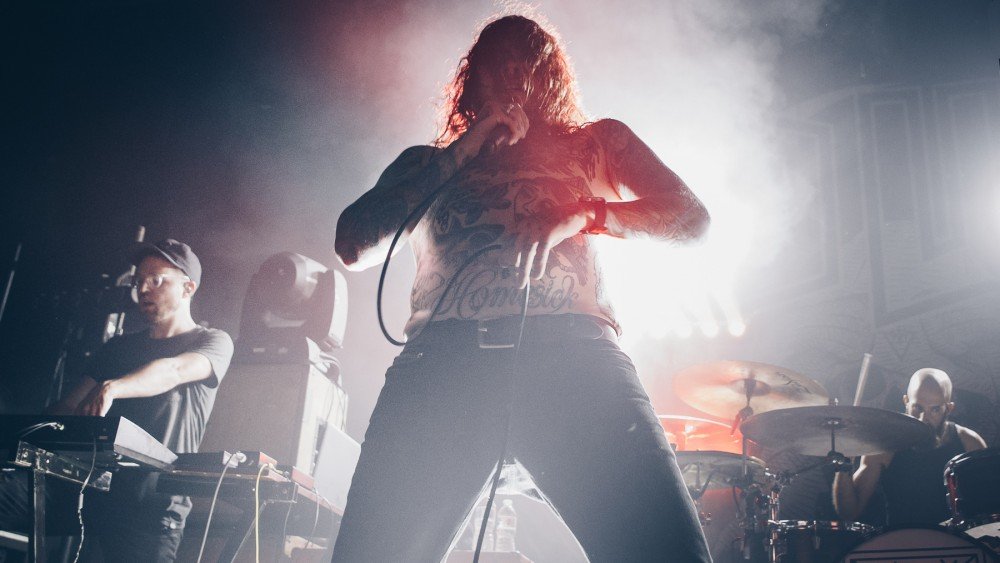 Tonight was a hard-hitting bill of American Metalcore, hardcore breakdowns, rock-n-roll and soaring solos at the Rickshaw Theatre. First off to open up the show were ’68, a duo that has a stage presence to be reckoned with. The members are drummer Nikko Yamada and guitarist/vocalist Josh Scogin (Ex-Norma Jean and The Chariot), who came out in their smart black and white suits ready to unleash chaos. Josh let out a scream before letting rip on his guitar with a huge bass tone effect and Nikko smashed the drum kit with full force. The chemistry between the two was electrifying. In between songs Josh had great banter with the audience, claiming they were actually Metallica. Even after their set had ended and the guitar was put down, Nikko kept drumming as Josh began to loud out the equipment, slowly taking away pieces of his drum kit. Possibly the best way to sum them up is their own sticker merchandise: “Rock and Roll with a kick in the pants”. These guys will no doubt be headlining their own tours soon enough.

Next up were Christian Metalcore Fit For A King. The band have been around just over 10 years with a few member changes but tonight the lineup was strong with each musician giving the crowd a reason to open up the mosh pit. They started with ‘The Price of Agony‘ from their latest album ‘Dark Skies’ released earlier this year which has a melodic intro before thrashing you into a soaring clean vocal chorus and dragging you back into a furious verse. Unlike some metal music which focuses on violence or death, their message and themes are: “a battle cry against the darkness. This is a sound that stands in defiance of the mounting pressure of modern life, not through dismissiveness or easy answers, but with earnest struggle.” The closing track of their set ‘Tower of Pain’ is a precise example of this, giving the listener a reason to turn darkness into light and sure enough, had fans going mental for the final breakdown.

Closing off the bill was one of the pioneers of today’s Metalcore genre, The Devil Wears Prada. This tour also commemorates their most acclaimed 2009 release, ‘With Roots Above and Branches Below’. For any fans of the genre, it was hard to miss some tracks from this album, such as ‘Danger: Wildman’, ‘Assistant to Regional Manager’ and an infamous Guitar Hero World Tour track that featured as a bonus track in the game, ‘Dez Moines’. Before playing through this record however, they opened with their latest recording ‘Sour Breath‘ which is a cover by a Christian singer-songwriter, Julien Baker, who had done covers of their songs, so they had decided to do one of hers. By track 6, the audience were well and truly warmed up and the opening track from their 2009 record ‘Sassafras’ began with its instant chaotic wall of sound and high to low screaming leading into several beatdowns. Among the hard-hitting riffs was also a song that had the crowd swaying, lighters and phone torches in hand, singing along to the harmony of ‘Louder Than Thunder’, lead by clean singer and guitarist Jeremy DePoyster. Even after more than a decade of the Metalcore genre, it is safe to say it is alive and well.