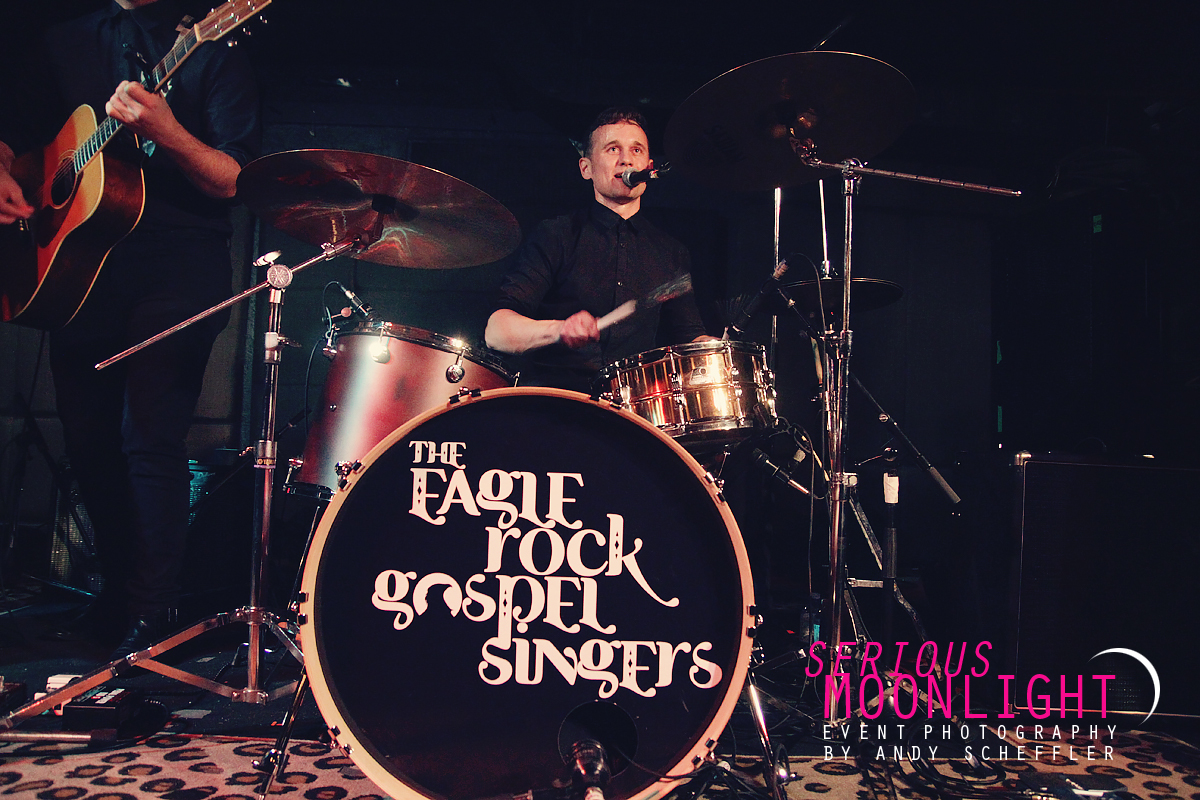 This charming and talented bunch were a big highlight of this past summer’s Burnaby Blues & Roots Festival (coverage here), so when the California group announced a return to Vancouver for their own show, I was right on top of it. The Media Club is a very different setting from the wide open main stage at Deer Lake Park, but in a way, the lush, intimate room seems to suit their sound. Anchored on impressive vocals and an obvious passion, they managed to pull people to the front and get feet shuffling in a half-full Vancouver room. I arrived at the venue just as hometown openers Lovecoast were on their last couple of songs. They appeared to have gotten the room well warmed up, and were pretty energetic on stage. Their sound is more straight-forward indie, and they ended the set with smiles on their faces and a round of high fives.

After a short changeover, The Eagle Rock Gospel Singers transitioned easily from stage set-up to performing, and invited the audience, currently hovering around the middle of the room or taking up the seating along the sides, to come forward. As usual, people started to shuffle up bit by bit, leaving a polite 4 feet in front of the stage. We can’t look too eager now, can we? The band started off with “Spirit In The Sky,” a song originally recorded by Norm Greenbaum, but which I know best from my childhood via the amusingly-videoed 1986 Doctor and the Medics version. They continued to work their way through a set that flip-flopped between original songs, and covers of traditional or well-known spiritual hymns and gospel music. Case in point, they followed “Spirit…” with a powerful original called “Underground” and then tore into a rousing version of The Staples Singers’ “Hammer and Nails.” The band cites The Staples Singers as one of a myriad of influences and inspirations. By this time, people were starting to boogie around a bit, aided by a bit more encouragement from the band in the form of invites to step up and a collection of clap-alongs. It’s difficult to really pin down their exact sound. While old gospel songs are certainly energetic, they bring a bit more of an uptick with the addition of a pace that trips elegantly over itself, well-placed hollering, a folksy/bluegrass dash, and plenty of tambourines and shakers. The vocal duties swap around from song to song as well among most of them, but are primarily the role of drummer Will Wadsworth and good-grief-incredible vocalist Kim Garcia. She looks at times like her head is about to pop off with the effort put forth in her bluesy wail. Guitarist Jeremy Horton sings a few as well.

They have had a bit of a line-up change since their set here at the Blues & Roots gig, though I am given to understand that this band sort of evolved out of a collection of like-minded musical friends who used to get house parties together as an excuse to jam, and the band has at times been considered to include up to 11 members on a rotating basis. A brief chat with some of the band after the show revealed that singer/tambourinist Andrea Chita is a months-old addition to the group, but bassist Kevin Collins had been part of the band previously. This time, they were all outfitted in basic black (a winter look, perhaps?), broken up by the glittery rhinestones at Chita’s neck and an interesting neck cuff on Garcia made of long silvery strands that shimmied back and forth as she moved. At some point, they brought up the Burnaby show and asked if anyone had seen them there. Quite a number of people piped up, showcasing the importance of festivals like that to get the word out and create some new fans. They threw some accolades towards their openers as well, with Wadsworth exclaiming, “Did you see Lovecoast? If you saw them, you caught something special. Those guys are on fire! I hope we cross paths with them again.”

“MMLJ” is another original they performed a little later in the set, and it’s absolutely flooring. It has a menacing sound to it, with a stunning build-up and just huge vocals. The recorded version has organs and horns that add a different dimension to the tune, but you hardly even notice those elements missing live since they bring so much energy to the table. The girls are just fierce, roaring their vocals that leapfrog gorgeously around each other. Wadsworth takes on a lot of the intersong banter. He started talking about how much he loves Canada, growing up in Buffalo and having spent a lot of time across the border in Ontario, in part thanks to an ex-pat family member. He said he could go on about Canada but he’d save it for later, however there was never any mention of his love for our vast country again in the show. Instead, he ended a tune so enthusiastically that he booted his kick drum forward a few inches towards the edge of the stage. Their set seemed stunningly short, and despite the growing warmth of the crowd and a heavy dose of applause as they stepped off the stage, there was no encore. The band members trekked to the back of the room to chat with the audience around their merch table, but within 10 minutes, there were only a few people left inside. It was lovely to see these guys back here, and hopefully they felt the love and are interested in returning to us again soon.