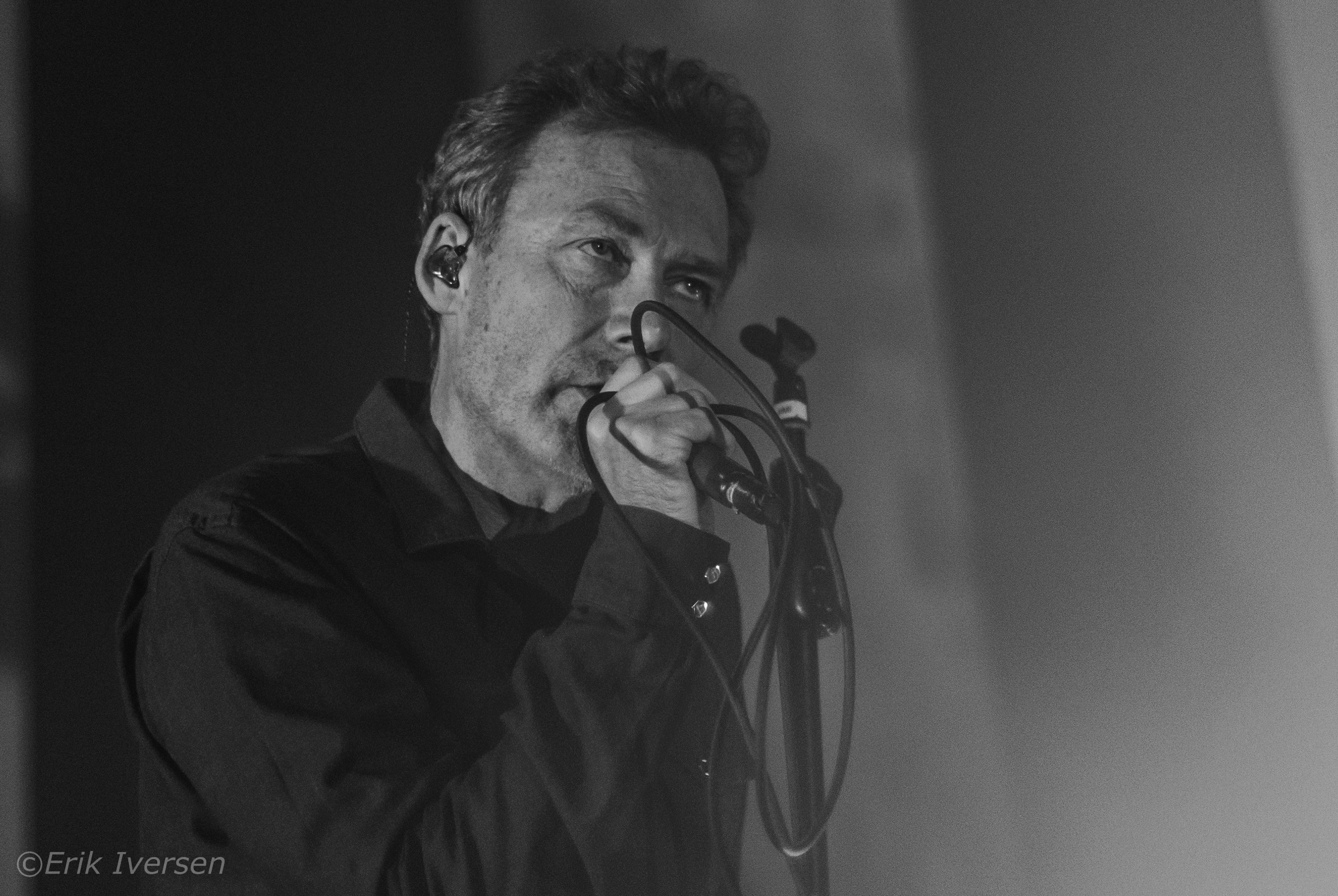 Dishevelled, I dashed over to the Vogue Theatre after getting late notice that we were approved to review the Jesus & Mary Chain show. What would be in store tonight with a band that has a colourful history of sketchy show times and unruly audiences?

Judging by the status of the photographers in the front line when I arrived and found a seat in the upper rows of the balcony level, I got there in time to see the end of opener Black Ryder’s second song. Initial impression was that the band was lush and dreamscapey, with female vocals that you barely even know are there, they breathe through the music so gently. The songs purred along, with not much to differentiate one from the next aside from the occasional switch from female to male lead vocals. I couldn’t discern a single word, something I might have used to figure out which songs they were playing, but I also rather think that misses the point of this set. It seemed to thrive on bleeding from one tune to the next. The only jarring moment came when one of the microphones delivered a crackly overtone to the singing, something that seemed a huge shame but was quite quickly rectified when a stagehand dashed out mid-song with a replacement. “Can you hear me now?” Yes, yes… we hear you. I spoke briefly with a music critic colleague of mine who was somewhat unimpressed with this band, but I found myself really enjoying them. I surmised it may have just been my mood – I had been at home, starting to wind down for the night, when I got the call to come out to this gig, so perhaps the mellow, droning music and stoic stage presence just matched my overall demeanour at the time.

Onwards to Jesus & Mary Chain, on tour to celebrate their iconic album Psychocandy and its unbelievably-30th anniversary. In some of the only banter we would get from seemingly-reluctant frontman Jim Reid gave us a quick, dry run-down of what was about to happen. Basically, we were going to hear ‘a short set’ of songs that were not included on Psychocandy (this turned out to be 7 songs), and then we were going to hear them perform Psychocandy in its original-issue entirety, and in its correct order. With that, they kicked off the non-Psychocandy set with “April Skies”, as the fog machines unleashed the first of what was to be an utterly unbelievable amount of fog. Jim Reid was positioned well to the front of the stage, where he didn’t do much except drop his mic stand to the stage a handful of times with a loud thud. It didn’t really matter that he’s not the most physically exuberant frontman, because you could hardly see him or his bandmates (including brother and co-founding-member William Reid, notably sporting the same curly moptop of hair from the 80s), lined up across the back of the stage, through the thickening haze and washing warm-white lights. The lighting often blasted along to the beat of the songs, firing off the wall of fog and completely obscuring the stage. Even the curvy rafters of the Vogue were starting to soften behind the fog, and I kept waiting for someone to bail down the stairs int he seizure-inducing lighting. Was this a ploy to make you listen more to the music, or to distract from the fact that these fellows aren’t all that interesting to watch? Who cares! It was a loud, buzzing set, with far more oomph to it live than we’re used to hearing from their 30-odd year old studio recordings.

As the set continued, it seemed to get noisier, with sounds like clanging trash can lids ringing through the music, the mic stand nearly teetering to the ground a couple times, and the crowd really amping up for “Reverence.” They ended the short set with “Upside Down” and then wandered off stage to crazy bright lights. Much of the audience took advantage of this short intermission to grab a drink at the bar or head to the facilities, while the stagehands busied themselves in the dark with retuning instruments as a short film with vintage imagery played on the heretofore unused white strips of material that hung down at the back of the stage.

As the Psychocandy set began, the atmosphere turned away from the densely-fogged, white-wall-lit look to a bright red wash, with visuals still splashed across those strips hanging down behind the band. They were no more mobile on stage, but they trundled diligently through the album set, sounding amazing in the theatre, overall energy picking up, nostalgia cascading around the room. The audience was a mix of original fans, and hip oldschool-loving kids, and indeed, not one riot was began, and the band played for more than 20 minutes. We were not privvy to any ongoing banter from anyone in the band, with Jim Reid simply thanking the room once during the set, and a final thank you just before the last tune (followed by some more stamping of the mic stand onto the stage floor). At times the lights fell into such darkness and the fog filled the room in such amounts that the visuals that were presumably intended to be projected onto the back of the stage ended up just flittering around on the fog itself. It was quite beautiful. The big 50s/60s pop influences sat behind this big feeling of youthful rebellion and general badassery – not too shabby that these guys can still pull that off in their middle years. I myself was not in a position to be there at this album’s original inception – I was a spud of a thing, probably singing along to Fred Penner, my forays into ‘adult’ music being whatever was on the radio or the cassette tapes my older sister owned (Miami Sound Machine, Cyndi Lauper, etc.). So it’s hard for me to drum up the same sense of nostalgia that likely made this one a sold-out show in a large room. What I got was a great gig, intense, driving tunes, and something that sounded fresh, even now, 30 years on, and with a cascade of imitators in its wake. These guys can still bring it.