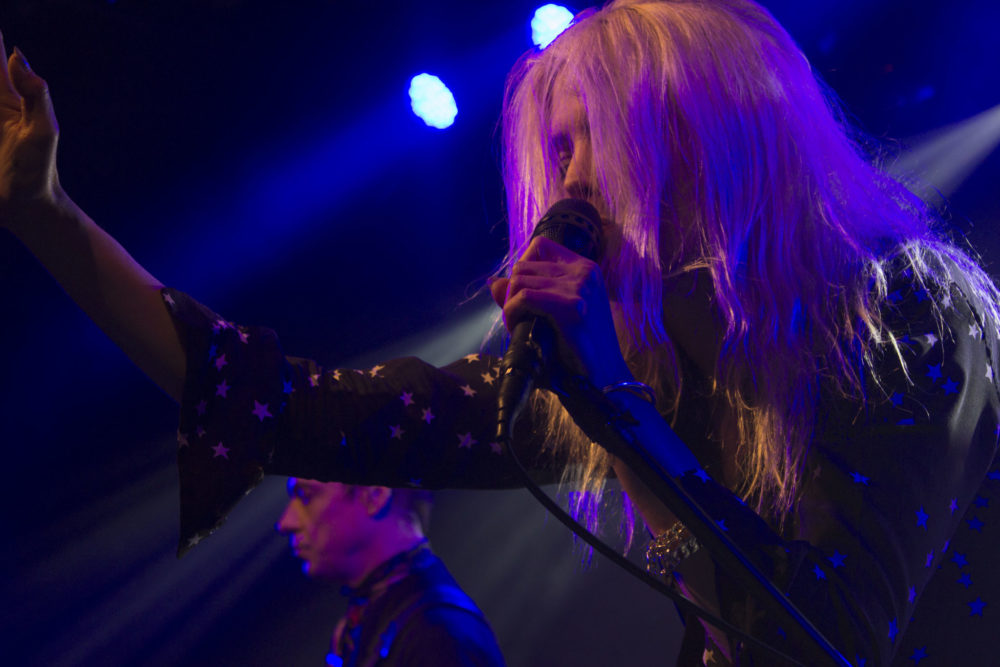 The Kills are a concise, tight duo who have significantly influenced today’s dominant contemporary rock-pop archetype. As their name might suggest, seasoned LA electro-rock band the Kills make gritty pop music. Composed of American vocalist Alison Mosshart  and English guitarist Jamie Hince, the pair craft bouncing, danceable drum beats and slicing, metallic-toned guitar licks. The Kills were out to promote Ash & Ice, their brand new fifth record and they were in a deadly mood.

Rushing excitedly onstage, Alison Mosshart  wasted no time before launching into spastic, twisting moves. Beginning with the impending and anxious “No Wow” from the band’s 2005 debut, Mosshart and Hince both looked ecstatic under the Commodore Ballroom’s  tempered stage lights. Both artists appeared completely in their element; Mosshart flailed onstage with an excited grace, swerving in and out of the orange and blue stage lights.

Busting into the harsh beat of “U.R.A Fever,” the Kills ran through another fan favourite before meandering towards new continuations of their contemporary electronic hybrid sound.  Ash & Ice maintains musical roots while flirting with  the band’s trajectory of electronic evolution.  The Kills have undergone various transformations which have included unexpected switches from distorted guitars to searing synthesizer melodies.  Their craft has evolved over the better part of two decades in which they established major groundwork of pop-friendly electro-rock. The lively nature of the music was perfectly suited to the Commodore Ballroom‘s almost-sold out Sunday crowd.

Ash & Ice is single heavy, the Kills have plenty of new material to slaughter. Mosshart voiced a strange yet compelling paradox on the new single  “Heart of a Dog:” I’m loyal/I’ve got the heart of a dog.” The band has continued to skirt the far limits of their genre with a tasteful evolution of their Indie-rock origins.

Returning, post-encore, the crowd was treated to “Tape Song,” a fan favourite. Up next came a subtle, persistent beat and pleasingly persistent synth line, which initiated “Siberian Nights,” a driving, urgent, danceable rocker tastefully touched Hince’s savage guitar flourishes. The song is a highlight of the newest record and seems to rank with the band’s best work. Hince’s guitar sound was agile, crunchy and never-overbearing; his guitar-work provides an organic, metallic flair to the band’s sound, an element increasingly rare in modern pop music. Playing through a pair of final songs, the band closed with the “Sour Cherry,” where Mosshart summoned a renewed energy for an 18th, ferocious song as she repeatedly sang “am I the only sour cherry on the fruit stand?” Still fruitful after 16 years, the Kills continue to rack-up points.