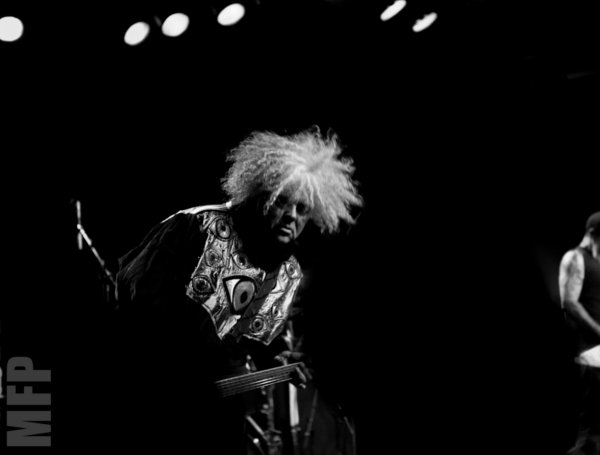 The room was less than half full when Le Butcherettes took the stage, which is a shame and loss for those not in attendence. This band brings energy with attitude to spare. Teri Gender Bender, vocals, guitar, keyboards and all around force of nature used the stage as her demented playground. Her stage presence is full of life, passion and just the right amount of hate. Her body possessed by the music and all emotions from joy to sadness present in her eyes as she acted similar to something out of The Exorcist. This is the kind of energy that every band leader should have. It’s obvious that every note and lyric is sincere and her soul is present on the stage alongside her demons, all of which culminates in a demonic sounding circus. Drummer Lia Braswell played on the edge of her seat, hitting every note with power and precision. Do yourself a favor, stop whatever you are doing and listen to either Cry is for the Flies or Sin Sin Sin. You won’t regret it.

The time between the bands was interesting on the stage right side of the venue. A large man, being held back by what I assume was his girlfriend, was yelling at another patron. He was accusing the other person of pushing him in the chest. I did not see what caused this, but it ended with security separating the groups and the large man scolding the girl he was with. “You don’t ever hold me back like that! He could have jumped me and I wouldn’t have been able to defend myself!” He seemed like a nice enough guy.

The Melvins took the stage accompanied by a sludgy, repetitive, trance inducing sound. They took this to the brink and launched into a set that the now full crowd ate up. Buzz Osbourne, aka King Buzzo, came out in a robe adorned with various eyeballs and let the hypnosis of the music affect him as well. He swayed across the stage, head lowered, his insane hair lit by the back light. The stoner sounds were accompanied by the appropriate scent of marijuana. The set consisted of a wide range of songs, including three from their newly released album Hold it On, which was recorded with Paul Leary and Jeff Pinkus of Butthole Surfers fame. Those songs were “Bride of Crankenstein”, “Onions Make the Milk Taste Bad” and “Sesame Street Meat”. No one comes up with song title as insane and amazing, quite like the Melvins. They even found time to cover “Moving to Florida” by Butthole Surfers.
The show was of the straight forward, no frills variety. It pummeled the audience in the best way possible.
This a tour not to be missed and make sure to get there early to catch the experience that is Le Butcherettes.