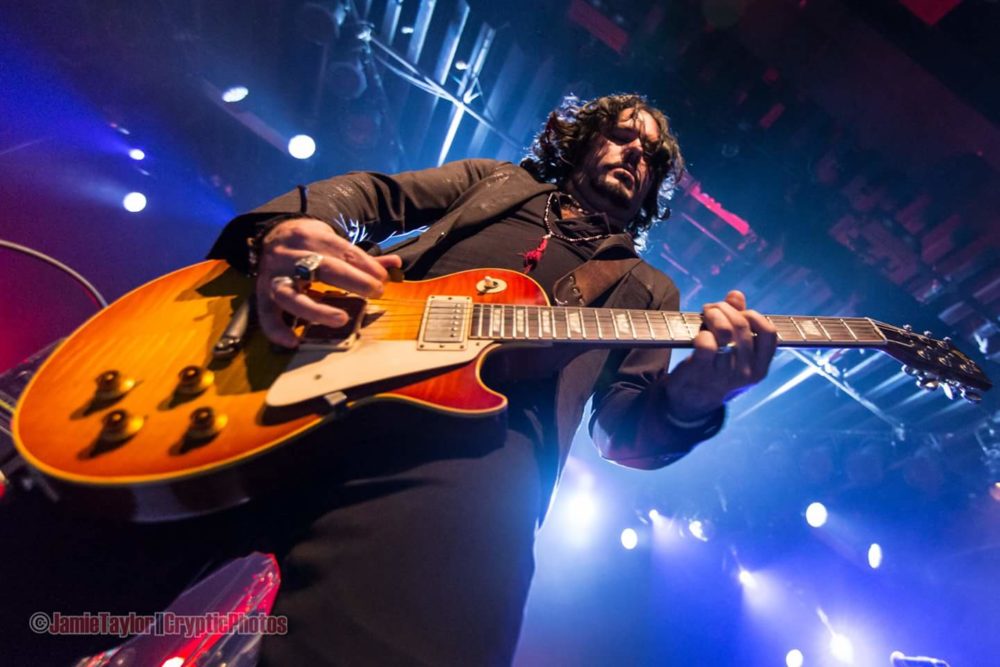 Continuing a trend this year of Canadian bands celebrating milestone anniversaries of popular albums from that ultra-productive late-90s era, The Tea Party has been bringing their 20-year throwback of their mould-shattering Transmission record across Canada, stopping for a pair of shows in Vancouver before turning south into the US, a prospect frontman Jeff Martin didn’t seem to be looking especially forward to. The current administration is perhaps making those border crossings even more of a headache for bands lately. Transmission capitalized on the band’s momentum from the brilliant The Edges of Twilight, throwing a strong electronic, some might say industrial, element in alongside their Eastern-influenced, romantic powerhouse rock and cinematic ballads.

Before things got rolling, there was a boisterous introduction from hosting CFOX DJs, followed by a quick and sweet marriage proposal. She looked stunned and she said ‘yes!’ Shortly, the house lights dimmed, the crowd noise rose, and out strode The Tea Party, from some sort of time capsule apparently. Martin and drummer Jeff Burrows have utterly not changed. Martin’s head-to-toe black attire and curly locks and Burrows’ bare arms and voluminous spiked coif remained. Bass player/synth/keyboardist Stuart Chatwood maintained his trademark arched-back, left-handed bass playing style and though added a beard and stylish glasses to his lithe frame, this otherwise might well have been a show from 1997 just to look at them.

This tour was focused on The Tea Party and Transmission. They had no opening act, instead, performing an extended set with a break in the middle (a Transmission Intermission perhaps? Oh, ho, ho…). The first set was simply the entire Transmission album, though they shuffled up the song order, starting out strong with “Army Ants” and unsurprisingly ending with lead-off single and massive hit “Temptation.” Many of the songs had new arrangements, adding elements, changing tempo, or switching up the vocal melody. It was an interesting, fresh re-imagining of the songs without losing their original appeal and power.

Between sets, Martin spoke to the room wryly about politics, age and music, but the running theme for the night was his at turns basking in/egging on the hollering adoration of the crowd, and jokingly telling them to quiet down because they have a lot to get through tonight. He’d lean over the audience, arms outstretched with beckoning hands, satisfied grin and closed eyes on his upturned face, drinking in the love, and then immediately wave them down and say something like, “Okay stop that – stop iiiit – we have so much to do.” Early on he time-machined us back to 1997, speaking fondly of the band’s Canadian musical contemporaries like The Tragically Hip, I Mother Earth and Moist. “Oh but the three of us, we had to do something different, didn’t we? We had to be the dark ones.” He talked about the darkness they pulled Transmission out of, but rising up to find beauty and inspiration, and that in mythology, when you do that, you are called the psychopomp. Cue masses of cheers and the song of the same name. Martin still engages with fluttery and expressive hand gestures to punctuate his poetic lyrics, when he’s not flying around the stage with one of his many impressive guitars. He referred to Burrows at one point as well, on his giant drum riser, as being so super loud from where he was standing just in front, and later as the greatest rock drummer in the world (to which Burrows stood and gave a hearty bow). Chatwood stays pretty subtle on the side of the stage, either buried behind racks of synths, or slithering around with his bass.

Another topic covered by Martin was the bad year that was 2016. “That f*cking sucked.” His point at this time was to talk about Donald Trump, who he referred to as a, “satanic orange chipmunk sitting in the most powerful seat in the world and he’s a f*cking idiot.” That led to him talking about respecting women (something the aforementioned chipmunk needs a few lessons on), and he went on to dedicate the next song to the ladies in the room, and had them men in the room dedicate the song to the ladies as well. That song was the soaring “Release.” The audience took the reins at the end, giving Martin’s deep, rich, distinctive vibrato a break as he conducted them with his characteristic theatrical hand gestures to the I want you to be free refrain.

A couple songs later, 2016 became the topic again, only this time to talk about the shockingly-large crop of musical movers and shakers the world of art lost that year, including Prince, “one of our own” Leonard Cohen, and of course, David Bowie. Martin explained that not only would The Tea Party not exist if not for Bowie, but neither would have anything cool in the 80s, or bands like The Killers, basically anything culturally from the intervening decades, if not for that man’s influence and boundary-breaking. He dedicated the song “Aftermath” to Bowie’s memory. Following this, he touched on the rumours throughout the band’s existence of sex, drugs, rock n roll and black magic.. “Most of it’s true, honestly… but come on, look at me. Look at me! Do I look like someone who would lead you into… temptation?” Again, it’s not a surprise they ended on this, not only because it’s perhaps their biggest hit of all time, but also because it’s the only song left from Transmission that they hadn’t yet played. The crowd went nuts, with lots of rock horns thrown, but somewhat surprisingly, no mosh pit was even attempted.

It was then time for a break. Burrows and Chatwood emerged from behind their respective instruments to sit arm-in-arm on the edge of the drum riser while Martin commanded the audience to get drinks and buy enough merch to be able to put their kids through college, and they’d be back in 20-22 minutes to play some more.

They stayed true to their word, and came out about 20 minutes hence roaring with “Writing’s on the Wall.” Martin asked us if we were ready for another 45-60 minutes of music, and the answer was most certainly yes. They only played five songs in this second set, picked from both before and after Transmission all the way up to 2014’s “The Ocean at the End,” but they drew them out so much with musical sections, intertwined U2 songs, and chit-chat that it did indeed end up being close to an hour long. Martin talked about MuchMusic’s glory days as well, and how he occasionally loathed being the lead singer in terms of music videos because of all the stuff they put him through. “Here, stand in this water, set it on fire, strap him up… what am I, Vin Diesel?” They ended this second set with “Save Me,” which featured an extra-bongo-y intro by way of Burrows and Martin. Various stage techs came and went with stools and instruments, culminating in the band’s guitar tech lavishly bringing forth a violin bow and presenting it to Martin on bended knee with bowed head as if it were a sacred sword. Martin brandished this bow with like respect, waving it over the crowd like a wand, before letting loose with it across the strings of his guitar, skittering, skimming and bouncing it off to elicit a screeching wall of intense noise. It almost got to Marty McFly/Back to the Future proportions. The band left the stage again then.

The crowd wasn’t having it though. There was a monumental need they’d not yet had satisfied. The Tea Party increased the drama and fervor by actually keeping the room waiting more than 20 seconds to come back for an encore, and in the meantime, the room rose with a scattered chant of “Sister Awake! Sister Awake!” The band delivered. They strolled back onto the stage with a wave, Martin saying, “I know I look really good but I’m getting old. I’m just gonna sit for this one.” The sitting was temporary as he was handed an acoustic guitar to play the recognizable and disarmingly-gentle intro to “Sister Awake” while Burrows pattered around the front of the stage high-fiving audience members and inciting a clap-along, before powerhousing into the meat of that tune. They really drew this song out, to the point that I figured they were on their way into a different one. They suddenly ended up in a little medley of songs like “Paint It Black” and “Under Pressure.” The crowd tried to take the “d-da-da-da” inflection of that song over, thinking Martin had stepped back from the mic to give them a chance to sing again. Martin just laughed and mocked like a grumpy toddler, “we wanna sing the rest of the song!” Instead, he turned the page over to “Heroes,” continuing the homage to the fallen Bowie. You’re a man after my heart, there, Martin. They polished that section off with a little “Walk on the Wild Side” before coming full circle and smashing back into “Sister Awake.” What an end! As the audience howled their happy heads off, the three members of the band smiled down at them and handed out picks, sticks and towels. Burrows picked a custom BC license plate up from someone’s hands and held it up for the room to see the “TTP” printed on it. The three of them pointed up at a camera to get the crowd, chanting the band’s name, to pose for a tour photo, something they have been doing on every stop so far. They took a quick bow then, and left the stage with a last wave.