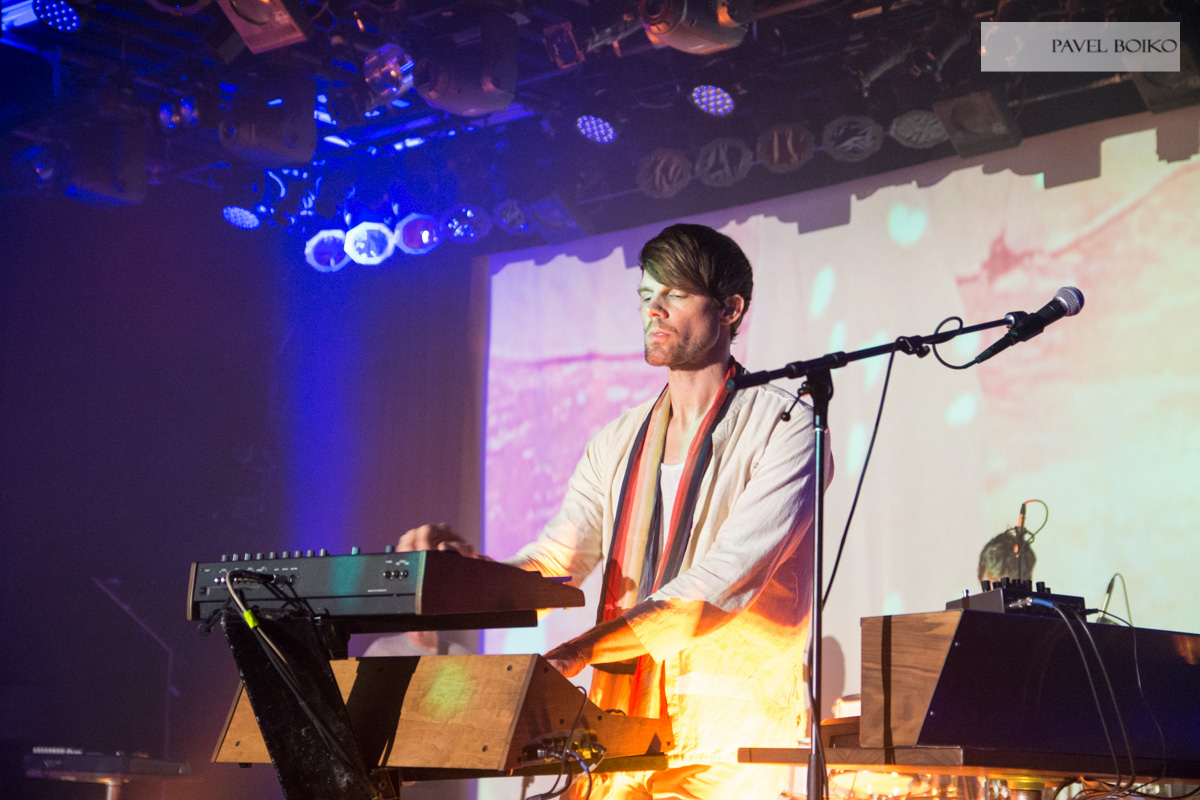 Playing support for the evening was Shigeto, a like minded lethargic electronic music producer. Brooklyn based, Shigeto, aka Zachary Shigeto Saginaw, memorized the audience with an ambient opening set. Belonging to the same label as abstract electro artist Tobacco, Shigeto specializes in like minded ambient electro lethargy. Using vintage key sets, and samplers, Shigeto melds a sonic atmosphere with more prominent musicianship than leading minimalists artists like Boards of Canada and Apex Twin. After setting up ethereal soundscapes with various triggers, Saginaw positioned himself on a percussion kit mounted in the centre of the stage. As his wave-like compositions ebb and flow, Saginaw added the sharp, snappy sound of analogue drums. Embodying many drifting, mellow melodies similar to Tycho, Shigeto provided a fitting warm up for the audience.
Shigeto provides an excellent example of musical music genres crossing paths as his brand of electronic ambience appeals to those who appreciate a heady electronic experience. Shigeto’s inclusion in Vancouver’s upcoming Levitation Festival is an indication of his abstract leanings.

Slightly pronounced than Boards of Canada, Tycho’s music echoes the steps of chill wave artists such as Neon Indian by retaining melodic scarcity and by placing a heavy focus on atmosphere. Debuting in 2004 with Sunrise Projector, Tycho initially consisted only of band leader and mastermind Scott Hansen; since the band’s blossoming popularity following the release of 2011’s Dive,Tycho expanded to a large band dynamic to incorporate live drums, bass and guitar. Delving into many cuts from 2014’s Awake, Tycho memorized the show’s sold out audience with the slow, dreamy saturated notes and steady beats they expected.

The music of Tycho appeals to a meandering part of the mind; the sight of Scott Hansen and company’s elegant sound production with its mid-tempo nature was in part overshadowed by the intense beauty of the stage craft. Personally designed by Hansen, who also creates all of his characteristically vivid yet minimal album artwork, images of bright sunshine over mountaintops and a sapphire sky made focusing the band’s generally stationary performance almost appear secondary. Most of Awake was performed in full, with an alternative remix of “Spectre” opening the set. The band returned for a three song encore including Awake’s title track and “Elegy,” the final track off of Dive. Swaying happily until the end of the performance, the appreciative crowd trickled out of the venue memorized.

Tycho’s performance, while intricate and balanced by the live performance of many of it’s elements, relies on distant abstract soundscapes that seem designed for a dark, comfortable bedroom. The exquisite sound system at the Commodore Ballroom provided a perfect live setting to appreciate the many sonic subtitles of Tycho’s gentle tones. Packed with dancing couples and smiling escapists, the evening’s dance floor afforded no vacancy.