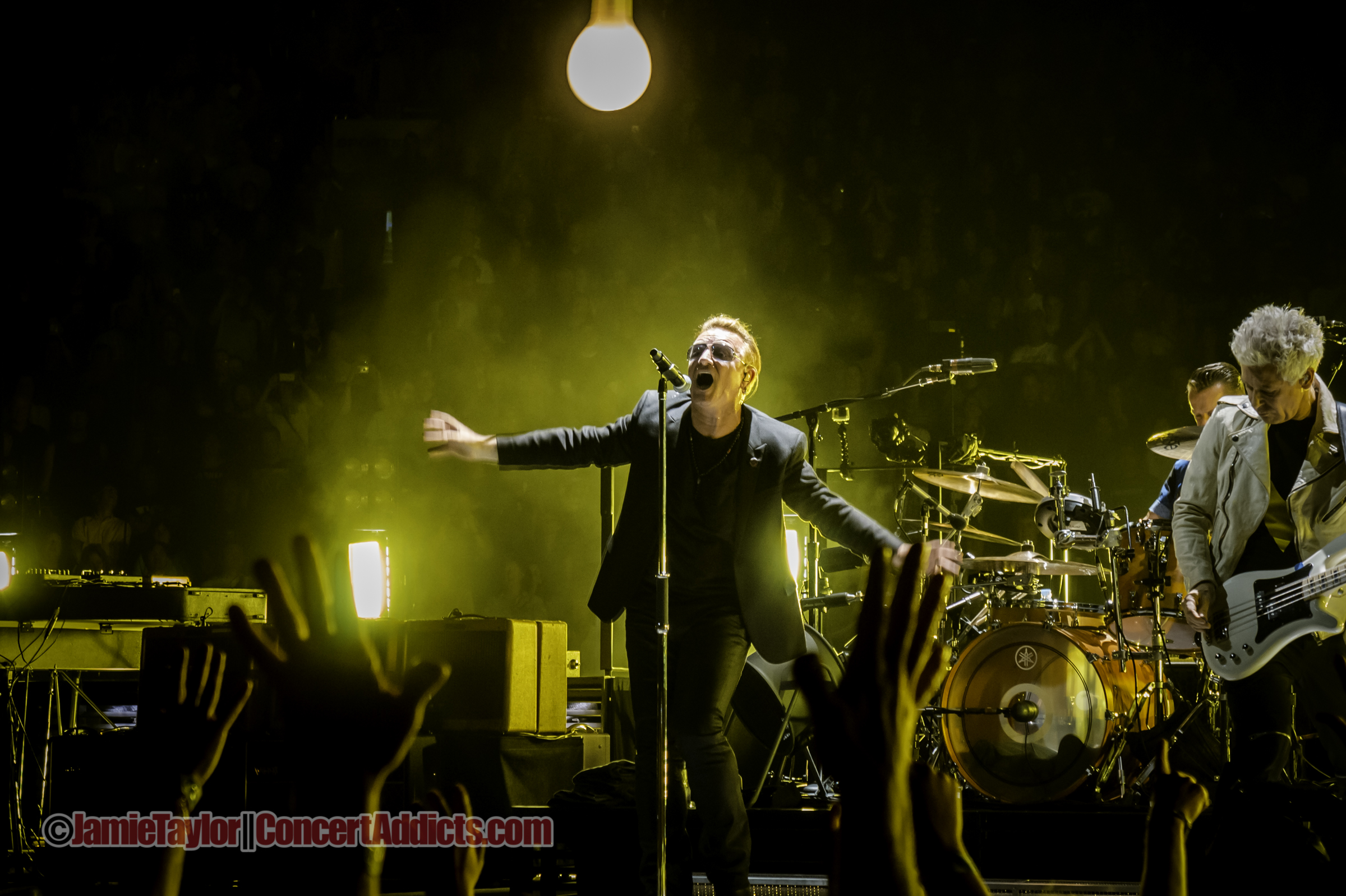 This was only my second time seeing Bono and crew in concert.

This time around the band had returned to arena shows, and took the stage at Rogers Arena.

The stage setup was, as usual, very original. The layout looked much like a barbel, one round stage at each end of the floor connected by long walkway. This meant that anyone on the floor would get close to the stage areas, and thus be close to the artist. A huge screen contraption hung above the walkway, matching it in length. This piece was the Pièce De Résistance. Not only did it consist of a large video screen on either side, it also contained another walkway. A set of stairs lowered from the 2nd walkway and allows the band to enter an area between the two screens. The beauty of this was when they lit the interior of this hulking mechanical center piece and left any part of the external screen unlit, you had a clear visual to see the artists inside. They used the screens to display interactive videos, that left strategic holes, thus allowing the artists to appear inside the live feed. It was a visual masterpiece. Although not ground breaking, as Trent Reznor did something like this on his last tour, it was on a massive scale and perfectly executed.

The band played for over two hours, providing two separate sets with a video break in between. There was no announcement or anything, but it was clear their was a division. The opening set was slower and softer and more delicate, and the second set was fiery and furious and electric. The band also returned for a 4 song encore, that saw them start the very last song on the main stage and play off as they walked down the walkway, and off the end of the smaller stage into the night. Unfortunately it was at this point that The Edge fell off the stage. I didn’t learn this until this morning, but there is a video (right here). I hope he is okay.

All in all the night was wonderful. Bono did seem to have a little rust in the pipes for the first few songs, but after that it was a solid performance. The Edge was a well oiled machine, despite that little fall at the end. Adam was all smiles and never missed a beat. Larry was solid, fiery presence. For those of you eager to see this tour, you will not be disappointed. The band is their usual high-level calibre of Irish rock awesome. I hope they announce the second leg of this tour soon. I am definitely going to go down to Seattle and see them again.

Set 1:
The Miracle (Of Joey Ramone)
Out of Control (with ‘Do You Remember Rock ‘n’ Roll Radio?’ snippet)
Vertigo (with ‘God Save The Queen’ snippet)
I Will Follow
Iris (Hold Me Close)
Cedarwood Road
Song for Someone
Sunday Bloody Sunday (acoustic) (without final verse)
Raised by Wolves (with ‘Psalm 23’ snippet)
Until the End of the World

Set 2:
Invisible
Even Better Than the Real Thing
Mysterious Ways (with ‘Burning Down The House’)
Desire
Sweetest Thing
Every Breaking Wave
Bullet the Blue Sky (The Hands That Built America snippet)
Pride (In the Name of Love)
The Troubles
With or Without You

Encore:
City of Blinding Lights
Beautiful Day (I Remember You snippet)
Where the Streets Have No Name (‘California There Is No End…)
I Still Haven’t Found What I’m Looking For (with Invisible snippet)

And without anything else to say, here are my photos from the crowd with my point and shoot.