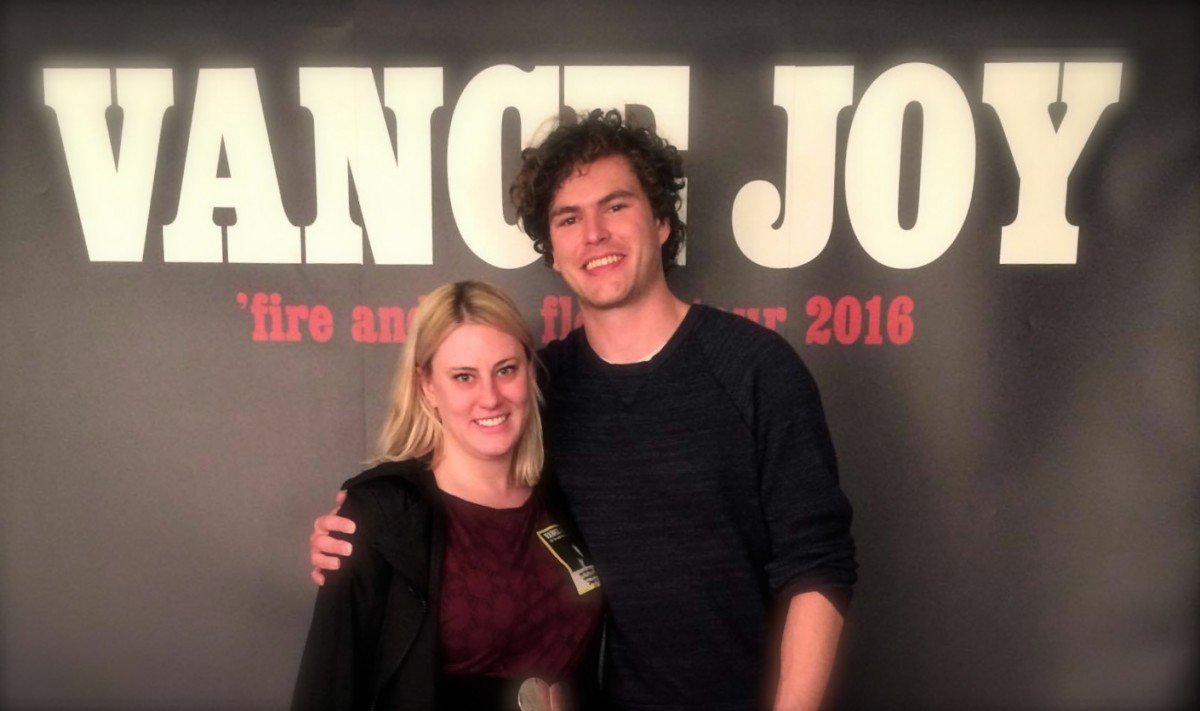 The New Year has been off to a great start so far. I got to see one of my (current) favorite musicians Vance Joy (real name James Keogh) perform the very first two shows of his brand new tour Fire and the Flood, one of which included a meet-and-a-greet with the artist himself. The 2016 tour began right here in Vancouver with both shows sold out – not a shabby start to one’s first headlining tour. I was lucky enough to have been selected as one of the M&G fans for the first show after having already bought tickets months ago for show #2. Can’t really complain about seeing an artist you love twice though, can you?

After watching various interviews, clips and performances of Vance Joy through the screen of my trusty laptop over the last year or so (which I tend to do with my favorite musicians) it was a bit surreal to see him standing right beside me in the flesh. Towering over me is more like it. All 6’4 of him. And I’m relatively tall for a girl.

He was kind and polite to the small group of us that joined him briefly backstage before the show. “Hi, I’m James. Nice to meet you” he said as he extended his hand shaking mine and then stopped to pose for a photo. Afterward, I asked if he wouldn’t mind signing the vinyl of his I had brought along with me, which he graciously accepted. It was a lovely start to the evening.

Following a terrific opening set by the Calgary rock band Reuben and the Dark, 9PM rolled around and Vance graced the stage, generating many enthusiastic cheers (and whistles). He kicked off his set with “Mess Is Mine,” an appropriate first-song choice. A cheery tune to get the night started, creating an upbeat atmosphere in the theatre. The singer-songwriter appears as humble onstage as he is off with his somewhat shy demeanor, briefly describing the inspiration and meaning behind each song before strumming his guitar or ukulele.

Check out our interview – A Chat With Vance Joy

Notable songs that were performed off of Dream Your Life Away (his debut album) were “Winds Of Change,” “Georgia”, and of course, the song that (in his words) ‘sort of really introduced me to the world,’ “Riptide.” Immediately following his most well-known hit was a fun mashup mix of covers of Paul Simon’s “You Can Call Me Al” and “Cheerleader” by OMI, which was arguably the most fun part of the evening. Toward the end of his set, he disappeared off stage briefly before returning for his encore to play “My Kind Of Man” and wrapping up the night with his latest single “Fire and the Flood,” which also inspired the name of his current tour. It proved to be a successful first night to say the least. I was happy to be part of the crowd who witnessed the very first show of this tour and see the growing success of the world’s new favorite Australian musician.