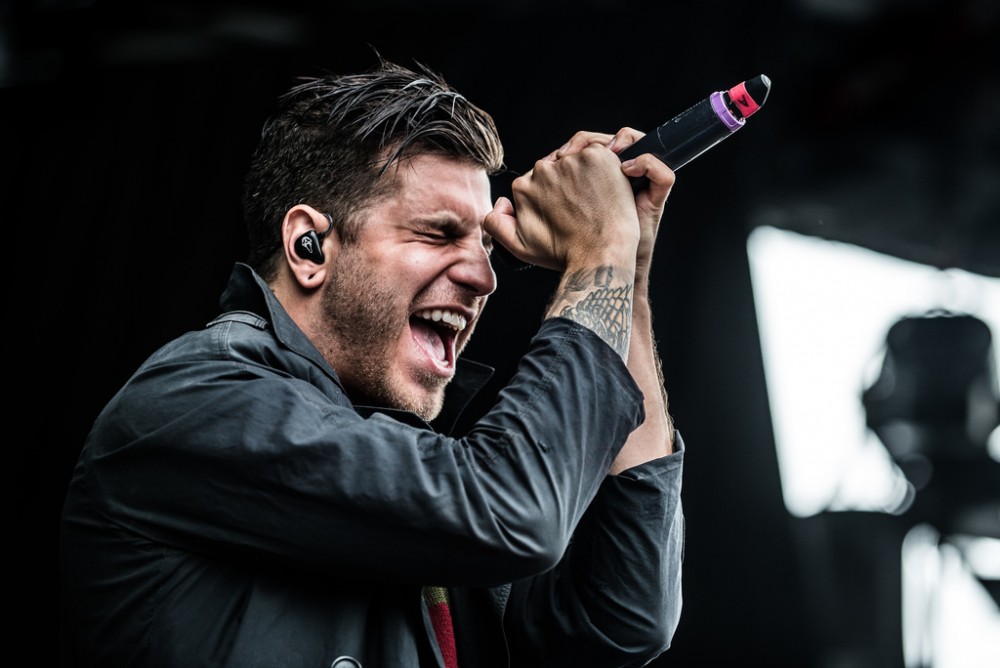 Ah, Warped Tour.  For over two decades, Vans Warped Tour has brought a travelling city of musicians across the country every summer.   Tens of thousands of fans brave the sweltering midsummer sun to see up-and-coming and big-name bands alike. The roulette of half-hour performances offers a unique experience for every date.  From Deftones (98) to Green Day (’00) to Blink 182 (96, 97, 99, ’00), massive bands have graced the Warped Tour stage to give this event a vibe unlike any other. But all good things must come to an end.  My first taste of this festival was my last-but with a smorgasbord of talent, the 2018 lineup was sure to make the final Tour one to remember. July 12th in Virginia Beach marked the 15th of 38 dates, and a cloudy, pleasant forecast was the first sign of what was sure to be an incredible and memorable day.

First up for the day was Aussie hardcore band Deez Nuts.  The Aussie quartet proved that while their moniker was tongue in cheek, their music was anything but.  Frontman JJ Peters brought swagger and energy to get the crowd moving early-their set began a mere 30 minutes after the day’s schedule was unveiled.  Deez Nuts set the tone for a nonstop day of heavy music over at the Mutant Red Dawn stage.

Part of what makes Warped Tour so unforgettable is the diversity of genres present each year.  After photographing an undeniably aggressive hardcore band, next up was 3OH!3 on the Journey’s Left Foot Stage.  From HXC to synthpop, the enthusiasm never wavered. Each person is able to build a schedule filled with bands they love, regardless of genre preference.  3OH!3 connected with the crowd early, jumping onto the barricade and singing directly into the front row. During a pause, hundreds of hands went up to form what I later found out was the 3OH!3 symbol-showing the sheer number of people who were truly grateful and involved in the performance.

Back on the Mutant Stages, In Heart’s Wake kept the aggression churning with their Australian brand of metalcore.  The whole crowd bounced to the rhythm, the pit spreading infectiously as the show went on. Midway through their setlist, vocalist Jake Taylor set sail on the crowd in an inflatable boat, brandishing an American Flag-the kind of craziness and spontaneity you’d only expect on Warped tour.

The fourth band of the afternoon, the horrorcore duo Twiztid, was an unexpected yet welcome injection of rap/hip-hop.  Their exaggerated black and white face paint gave them an unmistakable look that fits their ambience. While I didn’t know their music ahead of time, I definitely enjoyed their unique sound and what it brought to VWT.

Waterparks soon followed back on the Left Foot stage.  Their classic style of pop-punk drove the audience wild, if only for half an hour.  Waterparks had previously been featured on the tour (16 + hometown dates in 13 and 15), and it was clear this crowd had been waiting for one final sendoff to Waterparks’ Warped Tour career.

Next up was horror-themed metalcore band, Ice Nine Kills.  Besides the horror aesthetic, I knew very little about this act-so I was excited to see what they were all about.  Any amount of previous listening would not have prepared me for the manic yet brooding, dark aggression INK brought to the stage.  Vocalist Spencer Charnas, eyes brimming with mysteriousness, took the stage in a flowing black coat-eventually working his way into the crowd to be supported on the hands of the audience.  He sang surrounded by hundreds of fans on all sides-all that mattered right then for those individuals was that one moment of connection they came for. INK was one of my favourite sets of the day, and that was a direct result of the intimate moments that came naturally throughout the performance.  The connection between INK and their fans was unlike anything else I experienced that day and motivated me to check out more of their music.

The next band I had really been dying to see again-Scranton, PA-based metalcore giants Motionless in White. Their production was the most elaborate on the tour (at least that I saw)-towering angels flanking the MIW logo backdrop.  This gothic and over the top stage setup suggested a massive stage presence… and they sure delivered. The initial “GET UP” drop of their popular track “Reincarnate” was the most raucous drop in for a song I’d witnessed all day-limbs flying in the mosh pit and the entire crowd pulsing up and down like a wave.  Motionless is yet another veteran of Warped Tour, their first appearance coming back in 2005 and appearing nine times since. For this final run, it was obvious how much this set meant to fans-it was the largest crowd with by far the most crowd surfers. The staggering number of voices belting Chris Motionless’ words back at him was truly a sight to see, and MIW put on a show as badass as advertised.

Staying on the Mutant White Lightning stage, Every Time I Die kept the energy of Motionless in White going, but with a more pronounced hardcore punk edge.  The band was by far the most energetic of the day, guitarists leaping off of speakers and steps throughout the entire set. The raw aggression of their performance fit the old-school punk vibe of previous tours, but with a new age metal edge.  The pace was nonstop, and after they played their last note, one would think a breather would be in order. But no, not on Warped Tour. Next up was my top-billed band of the day-Utah Deathcore band Chelsea Grin.

As one of the heaviest bands on the bill, I had massive expectations for Chelsea Grin’s set.  With newly added vocalist Tom Barber (Formerly of Lorna Shore), Chelsea Grin promised that their upcoming record was to be their “Meanest, Darkest, Heaviest And Most Evil Creation To Date”-so yeah, you could say I was excited.  The band exploded onto the stage with their disgustingly heavy single “Dead Rose’-and I was immediately hooked by the crushing opening G# chord. The intensity only climbed from there, devilish high vocals whipping the crowd into a frenzy.  The breakneck grooves and gut-wrenching breakdowns made it absolutely impossible to not headbang. At one point during their track “My Damnation”, the crowd split in two on Barber’s command, with only the words “you know what to do” and motioning for a wall of death. The crashing bodies and chaos that followed was incredible to see for a festival not typically thought of as one for metalheads.  All in all, Chelsea Grin proved why they’re one of the biggest bands in the deathcore scene-setting the stage for the release of their new record “Eternal Nightmare” the next day.

After the insanity of Chelsea Grin, my warped tour experience was drawing to a close.  Bowling for Soup, on their eighth run of the Tour, hearkened back to 2000s pop punk and brought major nostalgia.  Beach balls bounced into the crowd, fitting for such a lighthearted and purely happy atmosphere. The band fed off of that, doing guitar tricks and cracking jokes between songs.  This kind of set reminded me of what the spirit of Warped tour was at its heart: all about having fun and embracing the moment.

The final band of the day of the final Virginia date of the final Warped tour was The Maine.  This was really when the weight of the word “final” really sunk in. Since this was the first time I’d ever experienced the wonders of this Tour, hearing the buzz of the audience with whispers of memories of previous Warped really let the end of Warped sink in.  The endless summer feel of this festival finally had its death date of August fifth, 2018… and it was starting to feel real.

The Maine put a stop to that melancholy and delivered a set entirely worthy of a send-off to such an influential event. You could feel the emotions in the air, but they only added to the carefree happiness that The Maine exuded onstage.  Whatever end was coming, it didn’t seem to matter as much while there was still music to be had. As the set was coming to a close, John O’Callaghan (vocals) hopped the barricade and sang directly to the front row. Giving those fans a fitting send off to warped, he walked down the line stage right and shook hands as he delivered the last notes of Warped. Those notes hung in the air as the band left the stage…the crowd seemingly in disbelief that this really was the end of such a wonderful day of music. While the endless summer of Vans Warped Tour only has about a week left, we can cherish the memories this tour has enabled for the last 24 years.