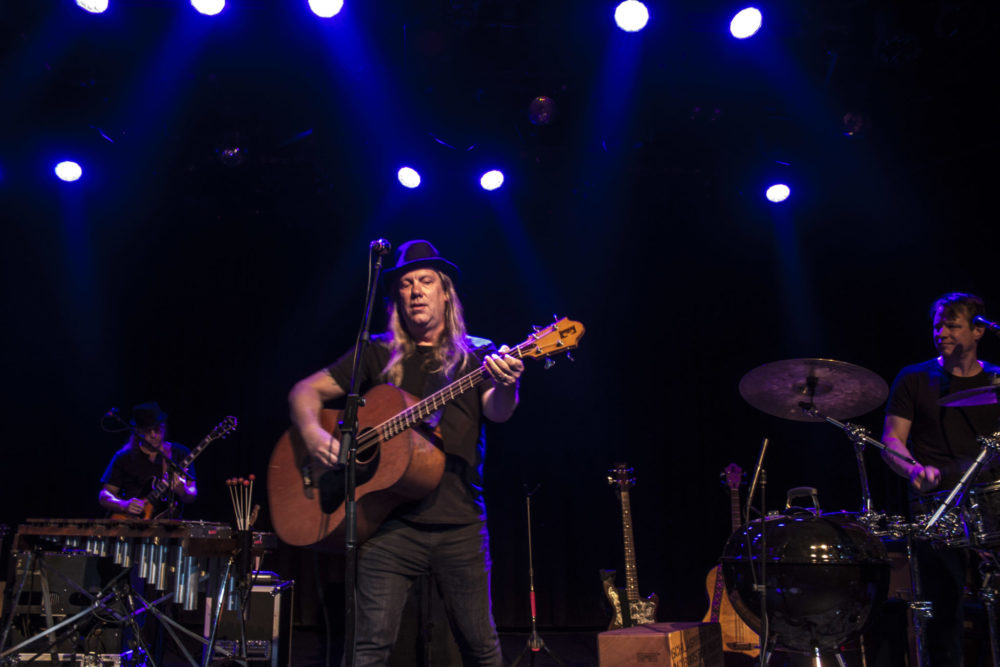 Gordon Gano of the Violent Femmes.

The Femmes enjoy the use of a large variety of acoustic guitars, ukuleles, mandolins and a xylophone. For such an acoustic arrangement, the show started with a bang as the band knocked directly into their biggest hit, “Blisters in the Sun.” Bassist Brian Ritchie dominated the stage with a friendly yet imposing presence. Holding his bulky, acoustic instrument towards the crowd, Ritchie drove the spastic bass line home. On the very first song, the Violent Femmes enjoyed the full use of an audience chorus vocals.

Gordon Gano of the Violent Femmes.

Formed in the early ‘80s in Milwaukee, Wisconsin, the Violent Femmes were originally barred from playing clubs due to their strange style of music. The band earned their stripes busking on the streets, which helps explain their peculiar instrument arrangements. The band uses electric guitars but their sound has always focused on the power of Ritchie’s acoustic bass and the brush-stroked percussion. The band has experienced some distasteful history at the end of the ‘00s but the core duo of Gordon Gano and Brian Ritchie now persist on with the added help of drummer John Sparrow. Also playing support was the horn section Horns of Dilemma, who touted and pouted with a fitting wackiness throughout the evening. Rumour has it, on “Black Girls,” the horn section play whatever notes they want as loud as they can. All of the musicians onstage were sharp and capable but there was an eccentric, stray element that could be explained by the band’s refusal to rehearse. The Femmes sound more fresh than your average thirty-five year old band.

While the night included generous portions of the group’s first and second records, the We Can Do Anything received a spirited and animated performance.  Given the venue’s sublime acoustics and the mostly acoustic arrangements, many songs were improvements to their studio counterparts. “I Can Do Anything” was convincing in its continuation of the Femmes’ twisted brand of rolling, upfront humour.

Gordon Gano of the Violent Femmes

Both the beginning and end of the set were particularly stacked with bullets. After a lengthy body of songs, the Violent Femmes cracked into a three-part-punch of early singles. If you weren’t in the mood by the time “Black Girls” “Gone, Daddy, Gone” and “Add It Up”  were played, you were at the wrong show. The sold-out audience danced away liberally; the energy of the Femmes demanded it so.

Gordon Gano of the Violent Femmes

After a brief encore, the band returned for a last pair of songs including “Memory” from the new record. Also released as the album’s single, the song could only be written by the Gano himself as it stays completely true to the band’s idiosyncratic style.  Polishing off the evening with the crowd favourite“American Music,” the Violent Femmes called it a night. Decades into their career, the band still blisters with energy and a bizarre, joke ridden musical adventures. Keep your eyes peeled and ears open for the Violent Femmes.

The Violent Femmes @ the Commodore Ballroom, 2016.