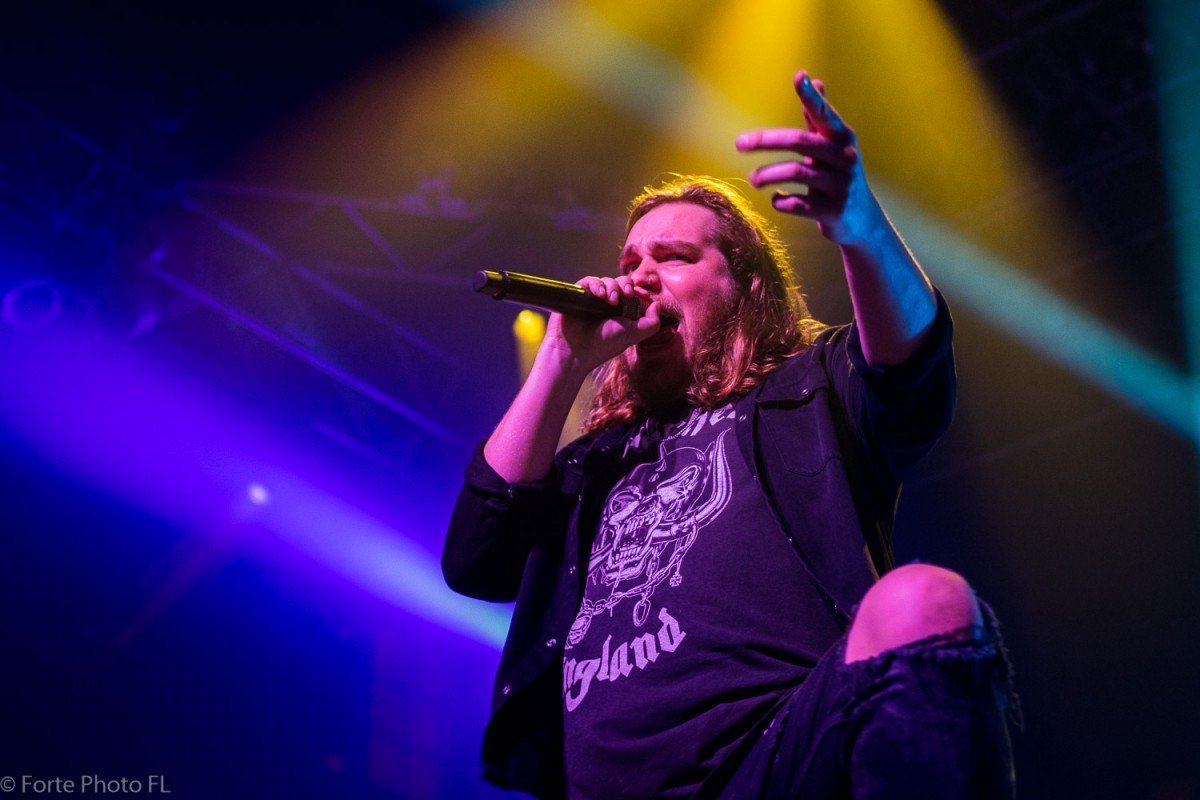 Touring in support of their third LP, Wage War launched straight into their first singles, “Who I Am” and “Prison” with blistering fury. The crowd returned the energy, matching clean vocalist Cody Quistad word-for-word on songs just over two-months-old.

The next five songs came from Wage War’s previous albums. Briton Bond whipped the crowd into a frenzy with his grizzly vocals, while Cody played counterpoint with soaring singalong choruses. “Don’t Let Me Fade Away” gave way to “Hollow,” followed by “Twenty One,” “Alive” and “Witness.” Lead guitarist Seth Blake poured on the heat with pure metal goodness, grinning like a madman on Alive’s sizzling solo.

Drummer Stephen Kluesener’s drove the band forward on Pressure’s “Grave,” pounding his kit with precision from the opening riffs. The brutal double breakdown in “The River” (complete with Briton’s cough mid-song) was followed by a breather in “Gravity” that started with a near-acapella chorus from Cody.

Wage War dipped back into “Pressure” to play “Ghost” and the emotionally charged “Me Against Myself.” The Man in Black himself (well, a sample from the seminal Folsom Prison recording) introduced the unflinching breakup song, “Johnny Cash,” before Wage War closed with Chris Gaylord’s fat, juicy basslines in “Low.”

Before starting the encore, Cody and Briton thanked the crowd for their support on behalf of Wage War. Growing up just a few hours north in Ocala, the band had stood in the crowd in House of Blues Orlando many times watching their favorite bands perform. Overcome by emotion, Cody stepped into an embrace from his bandmates, before closing out the night with the plaintive “Hurt” and crowd favorite “Stitch.”

Opening acts included metalcore veterans Like Moths to Flames, which peeled off one crowd favorite after another. The band dug deep into their catalog to open their set with “GNF” from 2011’s LP When We Don’t Exist, chased by “I Solemnly Swear” from 2013’s album An Eye for An Eye.  Shiny new single (literally two weeks old) “All That you Lost” pummeled the crowd with its push-and-pull rhythm. The delicate opening riffs of closer classic “Bury Your Pain” drew a huge crowd reaction.

Aussie powerhouse Polaris didn’t stop moving from the second they stepped foot on stage. Frontman Jamie Hails prowled the stage to deliver “Remedy” first, then ripped through “Casualty.” An unreleased track also made an appearance much to the audience’s delight.

Dayseeker opened the show with a setlist that mixed powerful anthems from prior LPs with three from their own recent release, Sleeptalk. Vocalist Rory Rodriguez and crew delivered a note-perfect performance that brought their albums to life.