Do you ever wish that it was socially acceptable to dress up like a zombie every day? Have you ever wondered how Tales of the Crypt Keeper would translate as a musical? Well Halloween came early on a Wednesday night at the Limelight for all those who answered yes.

All the goth babes and ghoul guys of Belfast came out to play with a double headliner show with Combichrist and Wednesday 13. Each bringing their unique take on the horror-inspired rock genre—and a hell of a lot of face paint—the two bands duked it out with equally arresting performances.

Combichrist began their set—and would continue it, I would discover—on a stage largely engulfed in darkness. Spotty strobes and flashes of lighting allowed the audience to snatch mere glimpses of the terrifying apparitions on stage, like something out of a chaotic nightmare, adding to the terrifying effect of the band’s undead-style makeup. 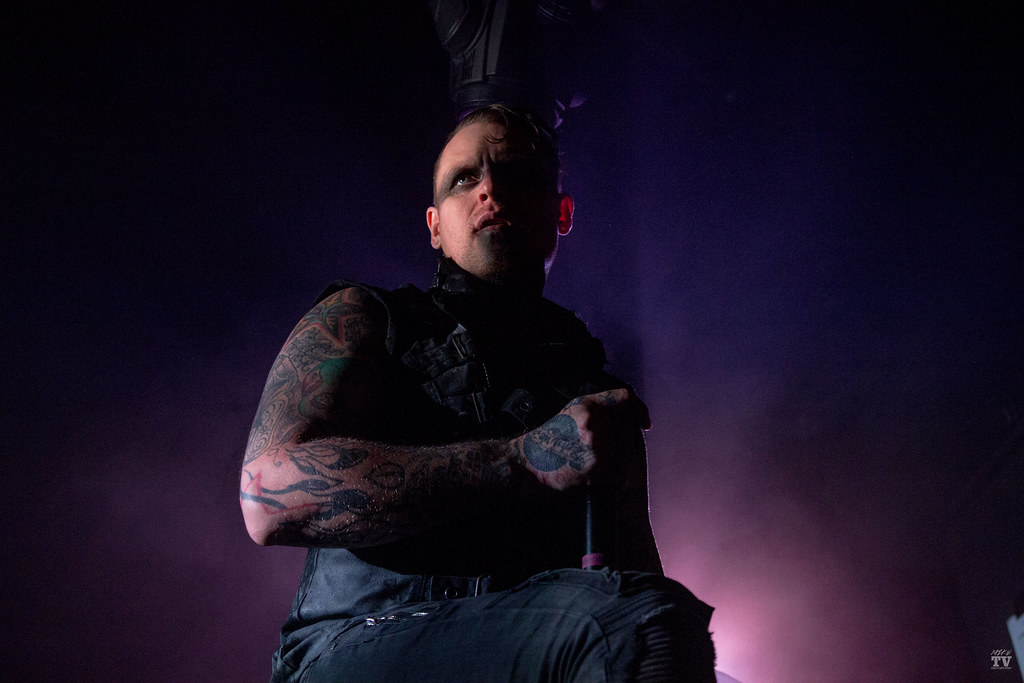 The screaming lyrics of their industrial metal sound was like a sucker punch as the group laid into it hard from the get go, and had the crowd chanting wildly within two numbers. With the beat throbbing dully like a hazard alarm and electronic chords emanating eerily, I had the sensation of being trapped in some hectic scene from an 80s sci-fi movie. Emitting serious Rammstein vibes, the dark and driving, beat-heavy band—with dueling drum kits flanking either side of the stage and the keyboardist dead center—marched on with sinisterly repetitive lyrics like, “Hear the voices in my head…”

But to my surprise, the music was not just the head-banging type, but foot-tapping and head-bobbing as well. This brand of metal is made all the more accessible by the electronic beat, and I was instantly amped up to dance, or at least jump up and down on the spot. Combichrist was like a dance music act that was possessed by demons, now performing at Satan’s rave.

This impression was reinforced by drummer Joe Letz, dressed in drag looking terrifying while sporting white contact lenses and a cheek retractor that showed off a silver grill, as he sardonically flipped his sticks away and reproduced them pointedly from a never-ending supply. Keyboardist Z Marr looked possessed during “Electrohead” and throughout the set, jamming his foot up on the deck, punching at the keys angrily. 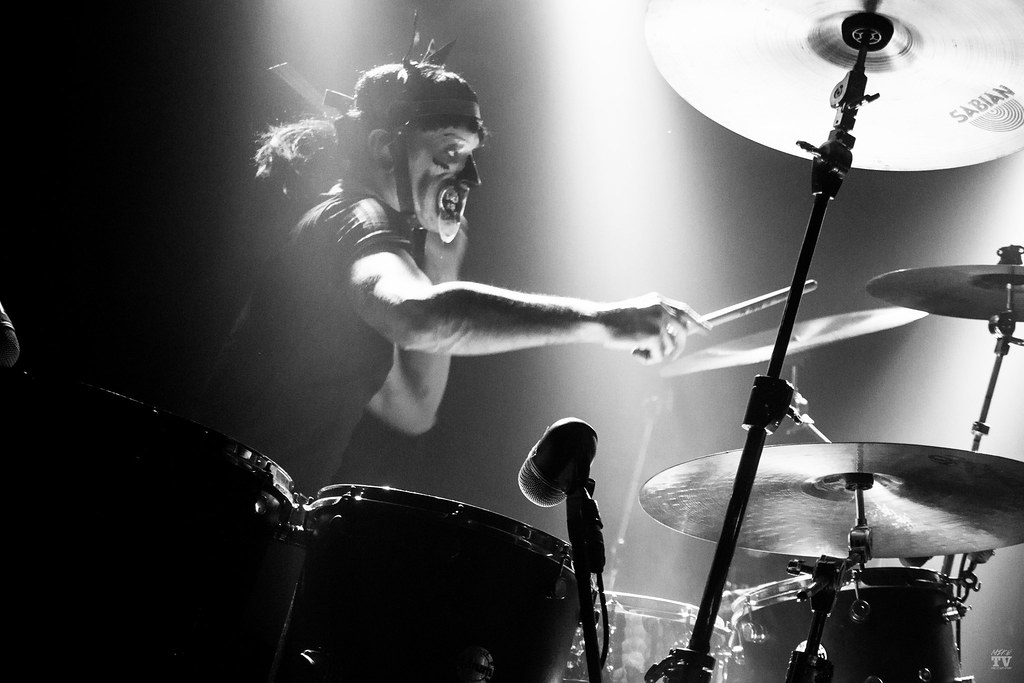 And I can’t forget about lead singer and the band’s founder Andy LaPlegua, spitting out murderous words with a crazy look in his eyes, pulsing, descending into madness, bearing his teeth, and pacing across the stage. Looming over the audience like the evil spirit whispering in your ear when you’re trying to fall asleep at night, LaPlegua delivered to Belfast the twisted lullaby they had been missing out on for 15 years, the time it took the band to make it here on tour.

Yet as enthralling as the performance was, in the latter half of the set, during “Get Your Body Beat”, the routine was getting a bit old and the tracks too repetitive to hold my attention.

With less than innovative lyrics, a typical menu of aggro-manifestos, my ears were crying for mercy. It all culminated in the final song, “WTF”, as every band member was shouting at me, “Hey you! What the fuck is wrong with you?!”

“I don’t know!” I wanted to cry back. “I! Don’t! Know!” But maybe there was something wrong with me, as all the metal-studded, leather-corsetted, fish-netted minions in the crowds were absolutely reveling in the opportunity to release some pent up rage and rock out.

During a rather lengthy intermission, the tension was building in the small room in anticipation of the notorious Wednesday 13. The crowd couldn’t wait to see what this eccentric dynamo, whose song titles could easily be interchanged with any number of pulp horror novels, would bring to the stage.

With his long black hair flowing, an axe-wielding Wednesday’s entrance was nothing less than you would expect, chopping the air as he barreled out. Shockingly pale with jet black eyes, Wednesday reached out to grab the audience by the soul, backed up by the collection of chanting skulls that makes up his band. 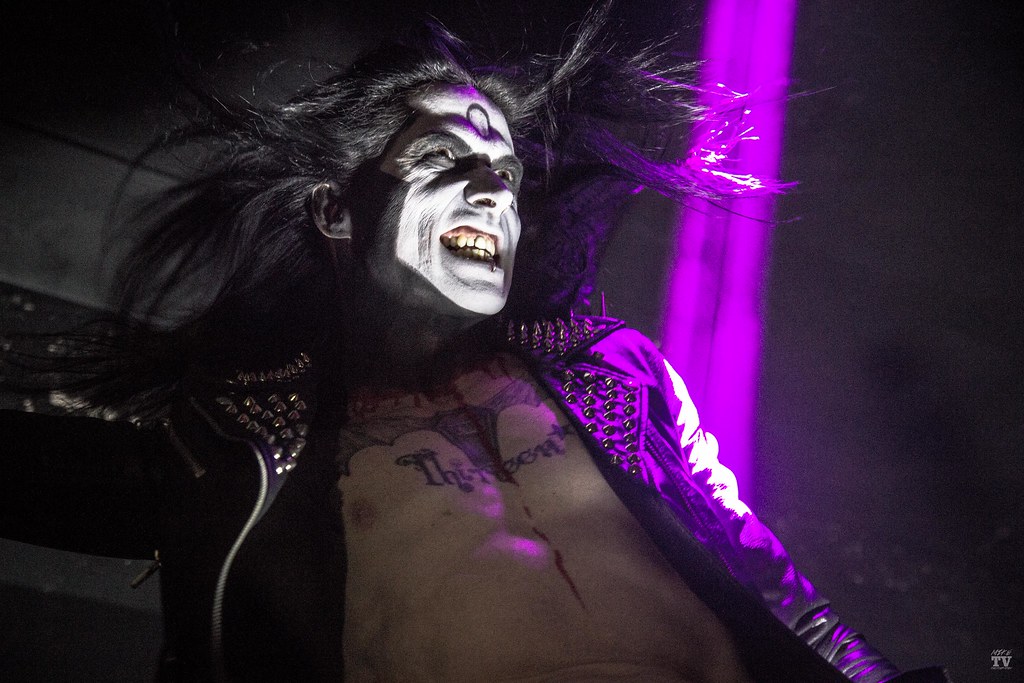 Halloween soundtrack effects underlining melodies and interludes made up of Twilight Zone-esque radio play revealed the influence of horror flicks upon the band’s sound. Heavy guitar riffs and the gravelly wail of Wednesday’s vocals made crowd scream—in thrill? Terror? Excitement? Surely it was a mix of all three as Wednesday towered, wide-stanced atop the speakers, stomping like a reanimated monster.

The gripping singer certainly doesn’t mince words in his lyrics, proclaiming in melodies dripping with tar that “everything you knew is a lie,” and singing songs about necrophilia.  As Wednesday dropped his axe, he took up a torch at the end of “Blood Sick”, shining it out into the crowd, as if seeking out all the frailties our minds.

Living up to his reputation for a love of macabre stage props, a few songs in saw Wednesday disappear off-stage only to reemerge transformed into a shiny horned demon in a cape for “Serpent Society”. Singing 666 ominously, the man presented what can only be described as a ballad to the devil, he who is “the savior…in serpent’s skin.” At this I was struck by what a dark turn the band’s music seems to have taken. In place of fun-loving horror punk tunes the band was laying down harder, devil-worshipping metal sounds.

And things just went from dark to darker. With another costume change, Wednesday came bolting onto stage in a tattered butchers apron, blood splattered on his face. He turned his back to the audience to reveal a blood-splattered mask fixed to the back of his head creating an unsettling illusion of split personality. Performing the better part of three songs in this manner, fittingly including “Put Your Death Mask On”, Wednesday managed to transform himself into a disturbing puppet of himself. With his hair blowing around the vacant-eyed mask and bare back posing as a distorted chest, the man bended everyone’s grasp on reality with the incredible effect. 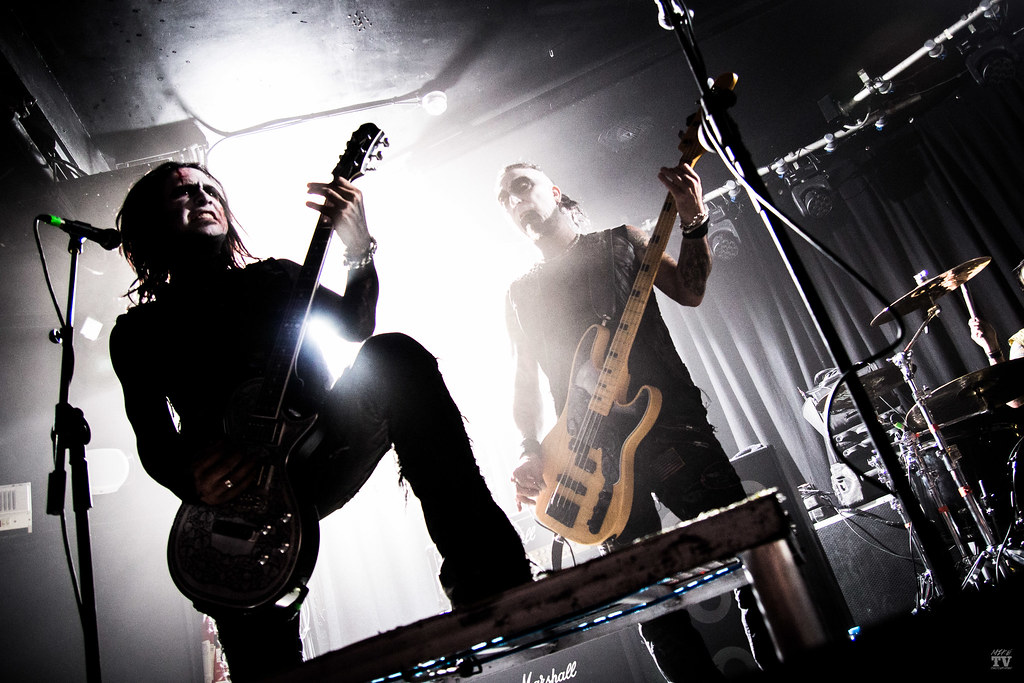 Near the end of the set, just when I was getting lost in the metal abyss, Wednesday cried out, “You’re never gonna believe what I did last night Belfast! I walked with a zombie!” With this, clad in his classic skeleton shirt, Wednesday delivered his big song, a catchy party banger with a slight country twang that brought me back from the dead.

Transitioning into the somewhat juvenile antics of “I Love to Say Fuck”, twirling an umbrella emblazoned with a giant middle finger, Wednesday ended the show by giving the crowd their second opportunity of the night to flip off the band they were so eagerly enjoying (the first being during Combichrist’s “Fuck That Shit”). And let’s face it, who doesn’t love to say fuck? Especially on a night like this, under the influence of such dementedly delightful, horrorful bands.

What The Night Brings

Put Your Death Mask On

I Want You…Dead / I Walked With A Zombie

Get Your Body Beat

Maggots at the Party

What the F**k is Wrong With You?