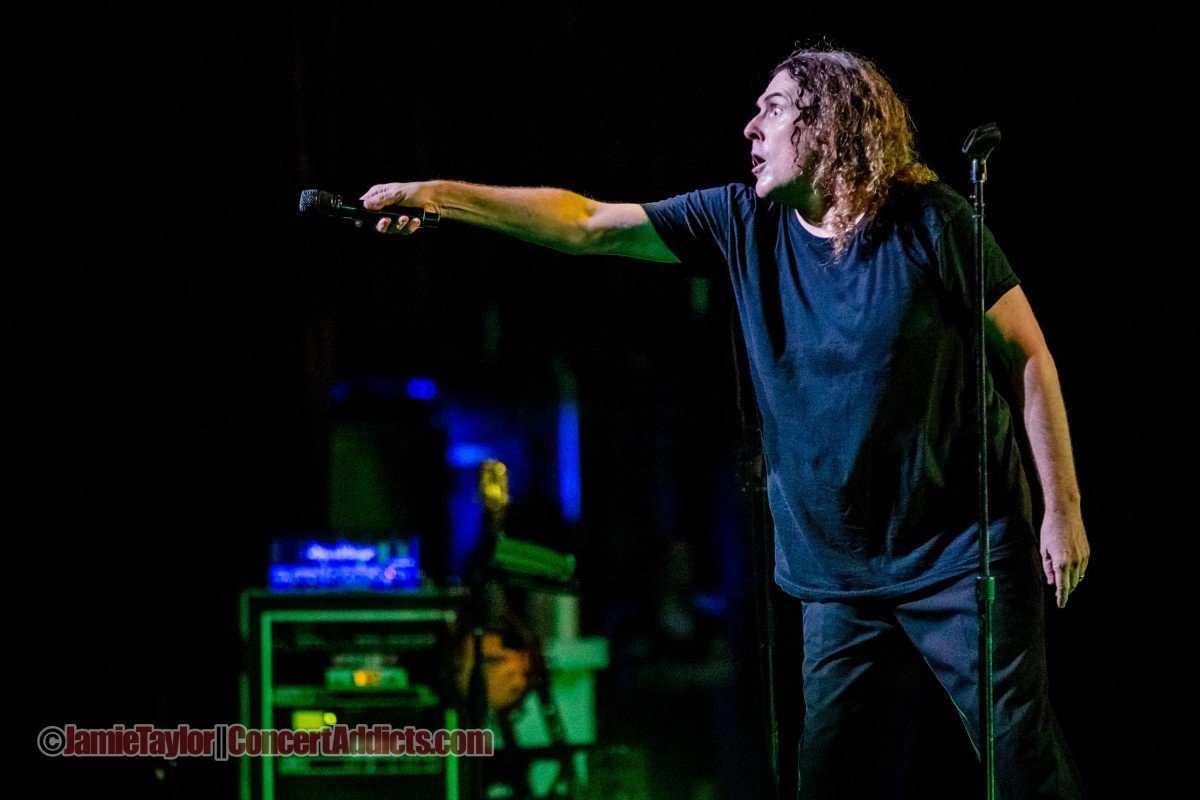 Walking into the the Queen Elizabeth Theatre, there was a noticeable number of bright Hawaiian shirts and otherwise outlandish clothing. When in Rome. If there’s ever a time and place to be wacky, it’s probably at a Weird Al Yankovich concert. Touring in support of his 2014 record Mandatory Fun , Yankovich played an explosive two-hour long set which excelled in both its musical and theatrical content. For almost each and every song, Yankovich and his band would trans-morph from one goofy get-up to another; the result was a stage show that was downright hilarious and fun. Weird Al Yankovich, an accordion aficionado, parody songwriter and satiricalist, grew to fame out of his covers of popular artists including Michael Jackson, Madonna, and Nirvana. Now into his fourth creative decade, Weird Al looks incredibly spry and all around on top of his game. After an inspired video intro ending with “GET READY FOR MANDATORY FUN,” the screen switched to techno-coloured clad Yankovich somewhere in the backstage area of the Queen Elizabeth Theatre. Brightly smiling and nearly bouncing off the wall, he cruised through the building’s lobby and ambushed a buzzing audience from behind. The succulent melody of “Tacky”, Yankovich’s redressing of “Happy” by Pharrell Williams. There would be plenty more surprises throughout the evening’s performance. It didn’t take long before Weird Al got dressed up as, for instance, a Lady-Gaga inspired purple octopus. Each and every song was a total change up; on the next song, Weird Al raised his accordion above his head and beckoned the crowd – “Can I ask you a personal question? ARE YOU READY FOR POLKA?” Each of this prankster’s albums has included a polka-medley connecting stomping versions of modern pop singles like Miley Cyrus’ “Wrecking Ball” and Gotye’s “Somebody That I Used to Know”. Pulling the melodic essence out of each tune, Yankovich received spirited cheers from the audience. His Polka Medleys are often fan favourites. Weird Al Yankovic and his accordion.

Weird Al’s ridiculous and fun cover adaptations can be heavy hitting: “Party in the CIA” ridicules authorities abusing power, while “Word Crimes” will warm the heart of any grammar buff or English teacher. Both songs included projections of their music videos behind the singer and his long time supporting musicians. Numbers were generally separated by short video segments of tv clips concerning Weird Al or by some of Yankovich’s own twisted celebrity interviews. Beyond his knack for parody, Weird Al has an undisputed talent for music. “First World Problems”, a quirky bombastic rocker made in homage to the Pixies, sounds so much like Frank Black and company that it could almost fit on Surfer Rosa or Trompe Le Monde; the stylistic resemblance was so in sync that it was almost uncanny. Mr. Yankovic in his fat suit for “Fat”

Many favourite parodies were covered; Weird Al wore a fat suit for his signature take on M.J. and bounced around like a teenage rocker on “Smells like Nirvana”. Perhaps Yankovich’s most enduring tune, “Amish Paradise” served as the main set’s closing song. Dressed up in beard and humble farmer clothes, his comedic genius simmered in front of the packed theatre as he sung his signature lyrical twist: “As I walk through the valley and the fields of grain/ I take a look at my wife and realize she’s very plain.” There’s also nothing quite like watching a really killer guitar solo played by a man dressed up like a religious farmer; the song continues to grow. 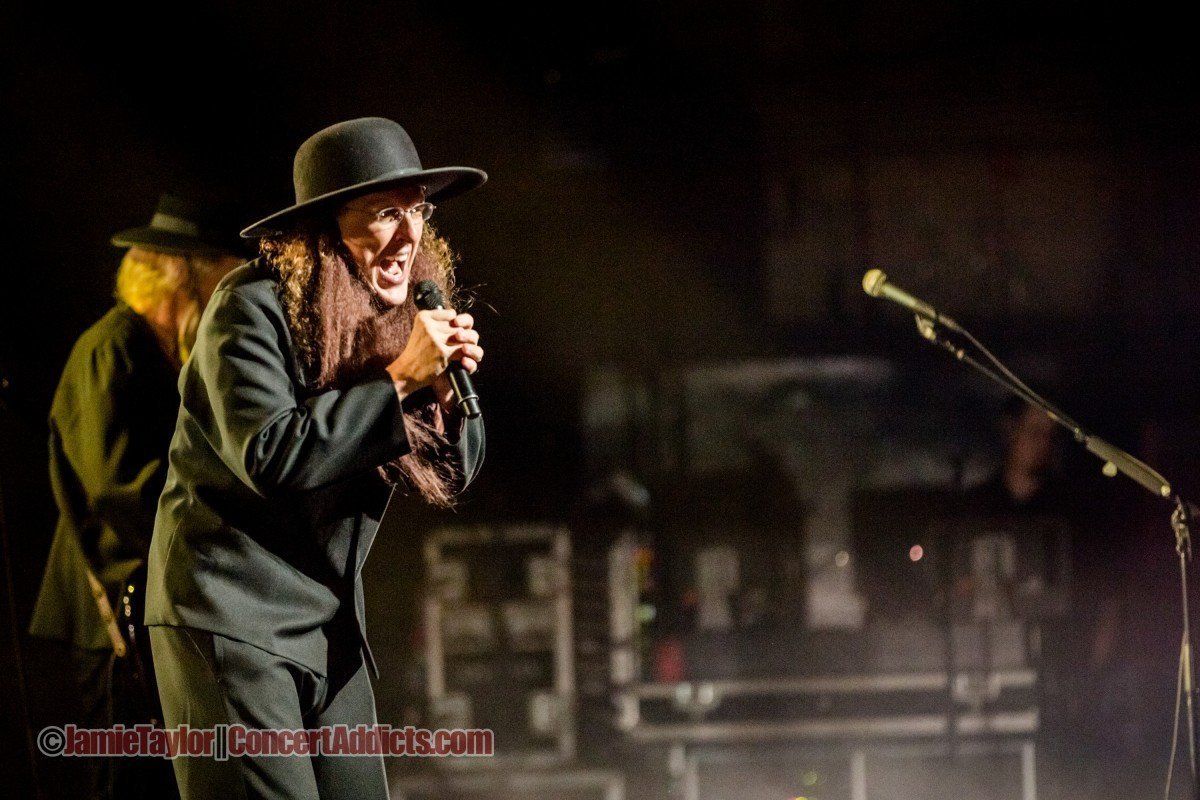 The audience demanded an encore; they were treated with a three-song Star Wars themed finale featuring a long line of storm troopers, Darth Vader and Yankovich himself costumed as Luke Skywalker. “Lola”, by the Kinks was always something of a silly song but was none the less transferred into “Yoda”; Weird Al’s fondness for Star Wars has leaked into more than one of his parodies. After two straight hours of high octane theatrics, the audience were more than satisfied with the healthy dose of comedic performance.

Most surprising of all were the strength of Yankovich’s newest material; Mandatory Fun is comparable to Weird Al’s most famous works. His recent performance hit new musical and comedic heights easily ranks among this year’s most outlandish, interesting and enjoyable shows. Recently, Yankovich stated in reaction to his late success:“I’ve been doing the same thing for 30 years and I just had the best week of my life.” Weird Al Yankovich is not only one of the most talented musical minds of the century, he is on top of his game.
[FAG id=123246]