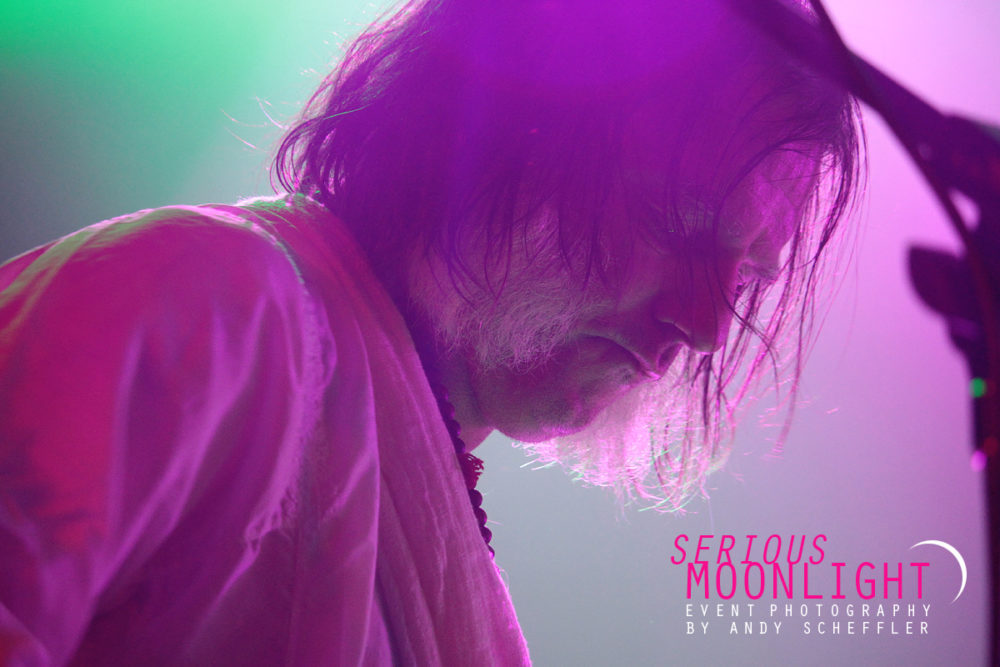 Who needs openers? Iconic, psychedelic group the Brian Jonestown Massacre performed a mammoth three hour twenty minute set to a sold out crowd at Vancouver’s Commodore Ballroom. Beyond their  phenomenal music, the BJM provide an uncompromised live experience. For those unfamiliar with the group, their perplexing moniker is the first hint of bandleader Anton Newcombe‘s peculiar angle of attack.  After playing much of the United States and some eastern Canadian dates (Edmonton’s show was unfortunately cancelled due to hold ups at the boarder), the BJM are in their best form in years. An underground but star-studded supergroup whose musical arrangements, work ethic and songwriting talents are comparable to the best, the Brian Jonestown Massacre are not a band to be missed.

Other than Pearl Jam or the Grateful Dead, few groups can manage to play straight for over three hours. BJM‘s lineup has been slightly amended from their Revelations era roaster;  guitarists Matt Hollywood and Frankie Teardrop Emerson’s absences have been filled by Ryan Van Kriedt  of  psychedelic outfits Astroid #4 and the Dead Skeletons. The BJM have undergone personnel changes in their 25 years of existence but sometimes members return, as with Ricky Maymi, who originally played drums but is now serving on guitar duty. Bassist Colin Hegna, drummer Dan Allaire, organ/mellotron player Rob Campanella  and charismatic tambourinist Joel Gion have played together for at least 15 years, both with the BJM and recently on Gion’s excellent solo record Apple Bonkers.  The band’s chemistry supports ambitious, meandering performance that is conceptual in nature. With no performances ever played exactly the same way, the energy felt a stark and refreshing change from the everyday static and overly practiced live set.

Instead of performing a standard set of songs each night, the band learned 30 songs for the current tour, making minor set list amendments.The un-ordered setlist gave the show an alluring edge of spontaneity. Sometimes the musicians jumped directly from song to song, at other points, Anton would speak to the crowd while guitars were being switched or tuned.  The change from longer, wall-of-sound oriented compositions to shorter pop cuts like “Telegram”  sounded especially rewarding. The BJM are renowned leaders of a touched up ‘60s revivalist style but the fellows also have a hardened history of quality shoe-gaze. Maymi‘s textured guitar sweeps glowed and interwove with Hegna’s clean, full bodied bass and the dream-like swirls of Campanella’s organ-work. Some of the band’s cleaner more pop-driven work, like the infectious melody’d “Servo,” were beefed up with more lush instrumentation than their studio counterparts. Newcombe has maintained that a song should never absolutely complete upon recording as it needs space to expand through live performance; many of his songs have aged very well in their live incarnations. “Vad Hände Med Dem?”, played early in the set, burned far brighter than its studio recording with a meatier edge and emboldened guitars.

Fans were treated with a spectrum of material; old cuts like “Never, Ever” and “Wisdom” counter-balanced “Goodbye Butterfly” and “What You Isn’t.” Also played were a few winners from Thingy Wingy Mini Album, released last year during the group’s successful Australian tour; “Leave It Alone” and “Phish,” which included guest vocals courtesy of Newcombe’s wife Katy, sounded compelling as the group’s best work and already have a feeling of familiarity.  A prolific songwriter, Anton Newcomb has coined far more quality songs than could ever be played in a single instant. Even with such a long set, not all favourites could be played. A new song, “Government Beard” cut sounded complete in its composition and is likely to be on new albums later this year.

Speaking candidly to the audience, Newcombe spoke about his habit of offering concert tickets as prizes for any fans that could prove a donation to Oxfam or Doctors Without Boarders. Newcombe jested the Canadian audience over the fact that not a single person took part in this show’s fundraiser. Although Newcombe can  occasionally be a bit frantic in his communications with the audience, on this particular topic his cutting insinuations were on the mark. Apparently, what you isn’t, Vancouver, is charitable.

After the exaggerated insinuations of the film Dig!, a popular film featuring the BJM and Dandy Warhols various music experiences, Anton is made out to look like he’s about to snap; it is one of the most unfair portrayal, shown at  some of his darkest moments only accessible to the film maker because of a revolutionary zeal for media experimentation. Operating the Brian Jonestown Massacre like a well oiled machine for such an extended set is an ultimate response to the increasingly discredited movie. Such media attitudes contribute to unreasonable rowdiness for a band with such a non-heavy sound. Crowd surfing and mosh pits were definitely out of place, a few people on the floor could not handle their drugs and were a tad irritating. The energy of fans watching the BJM from atop construction equipment at Levitation 2016was far more alluring.

After crushing the audience with such a copious amount of music, the organ swell of “She’s Gone” initiated the final song of the evening; extended, lush soundscape heated up before slowly winding down into coals. Joel Gion slowly shed his dutiful maracas one by one before he waved goodnight and retreated offstage. The expansive, mind blowing experiment had to come to an end.

Rock music is a form of resistance, rebellion and exploration that has had a rather unconvincing showing in wider musical culture as of late. These guys are a battle-tested supergroup headed by a revolutionary artist and compositional genius. The Brian Jonestown Massacre is one of the most incomparable and critically rewarding musical outfits of the last quarter century. The band is still on fire.

Also by A Love That’s Sound:

Austin Psych Fest 2014 – An Interview with Anton Newcombe of the Brian Jonestown Massacre.