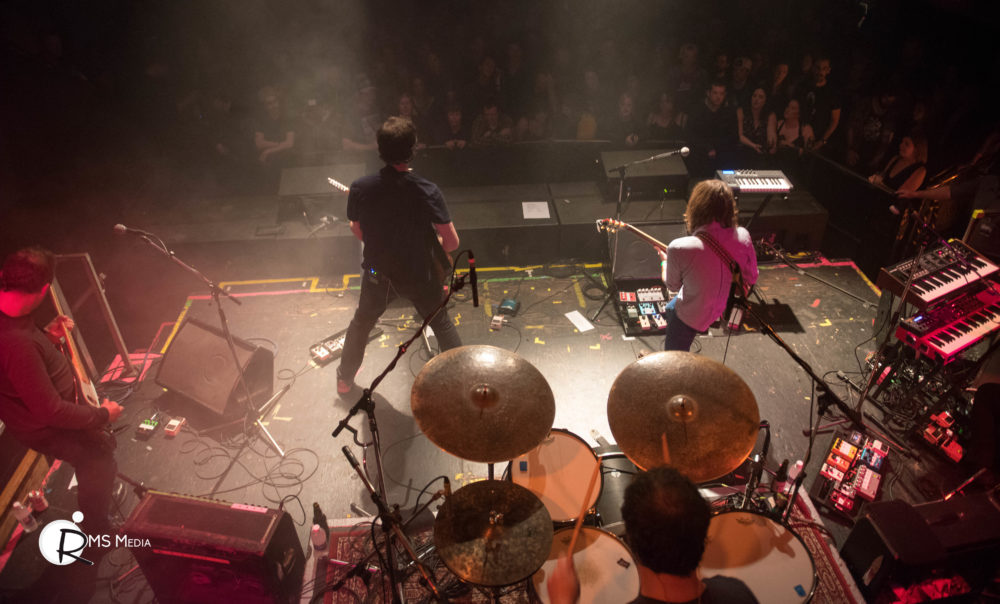 Another one in the realm of early live shows to make way for weekend club nights after, Wintersleep and guests Fake Palms set up shop in Sugar Nightclub in Victoria. Toronto band Fake Palms, along for this tour, opened at a ridiculously-early hour to a room with a lot of folks still trickling in. It was their first time playing way on this side of the country, so we were told, and they bright a somewhat urgent, foreboding kind of sound to the room to warm people up for the headliners. 2 out of 4 band members were sporting the modified Canadian tuxedo of denim shirt and black jeans, a popular choice on this tour.

As was indicated before they even got on stage via Fake Palms enquiry after the same, the room was excited for Wintersleep. During the brief set changeover, folks wasted little time in filling the dreaded horseshoe-shaped gap immediately in front of the stage that people unfamiliar with an opening band always seem reluctant to stand in. Fake Palms had played their set on a small portion of the stage in front of much of Wintersleep’s gear (and their large banner), so it didn’t take long to swap over. They kicked up the energy in the now mostly-full room, with vocalist Paul Murphy continually seeming to be more and more vivacious in his role, especially noticeable when he’s not holding a guitar. He clutches at the chest of his shirt, hangs with two hands off the mic and drags the whole stand around the stage with him, and is in a continual state of indecision about keeping his in-ear monitors in or not. Realizing fully that where I was standing (behind the speaker stacks and probably just getting a mish-mash-up of monitor mixes from the stage) was a contributing factor, the sound in the room was a bit grating at times, over-emphasizing the gravelly tones in Murphy’s voice. Speaking of guitars, guitarist Tim D’Eon is a spitfire, usually with his face well-hidden behind a mop of hair an impressive beard, but always on the move somewhere on stage. He may have taken it a little too far this time, as one of the first things he did was fail at the relaunch from a deep squat, and instead of trying to save it in any way, he fell right over on his back, feet in the air, and continued to play while openly giggling about it. As I was told by him later, “If you’re gonna fall, always fall in the first three songs so you have a bunch of photographers there to catch it.”

Relatively new on bass duties (but not to the band’s operations in general) was Chris Bell, and on the other side of the stage, transitioning easily from keyboards to tambourines to shakers to guitars and singing the whole time to boot, Jon Samuel, and of course, in behind tying everything together, Loel Campbell’s signature skittering and loud drumming style keeps things rolling. Campbell drew the delight of some folks on the stairs around me, whose jaws continually dropped to the floor as they pointed enthusiastically his way any time he flickered through various tempo changes and crazy sequences.

Of course they are touring behind their The Great Detachment album still, in a brand new world. Their not-so-subtle video for the tight lead-off single “Amerika” takes on a whole new creepy and ominous feel in a post-Trump-elected environment. The song truly is great though, and drew a huge response from the audience, but otherwise, the selections from the show that seemed to get people the most riled up all were from 2007’s Welcome To The Night Sky. It says something about the quality of an album when a decade on, it’s still the one really turning heads. It’s a great disc, probably my personal favourite of theirs, and I’m glad to see I’m not the only one who thinks so. A lot of audience suggestions were from even further back in the catalog (primarily “Orca”… we’re a whale-laden coast. We like our orcas. And it’s a cool song), though none of those suggestions resulted in a deviation from the existing set list. That set list ended with “Migration,” which itself tails with a set of punchy chords woven through a series of la-la-la-la-la-la‘s. The crowd was only too happy to join in on these. Murphy made an attempt to pop up on the speakers for a second to conduct this happening but seemed to suddenly change his mind.

The audience half-organized a cheer to get the band back out for an encore. It seems half of them were chanting “WIN-TER-SLEEP!” and half were chanting “ONE MORE SONG!” Regardless, out they came for two more, ending everything with the powerful “Danse Macabre” off of 2005’s untitled release. I was expecting a huge jam on this song, which sometimes happens, but I suppose they were pressed for time a bit with the forthcoming club night, so kept the jam short and were off the stage nice and tidy by 10pm.

Basically I am never not in a mood to listen to these guys, live or on record. The room was happy, even as they were abruptly descended upon by the opening of the club night and the instruments on stage were promptly replaced with decks, the battered jeans and vintage coats in the crowd replaced with platform pumps and shimmery miniskirts. With the way Wintersleep tore up the stage tonight in a smaller room with dicey sound, I was truly looking forward to seeing what they would do back at the Commodore Ballroom the following night in Vancouver.

The requested photo source cannot be loaded at this time. Photoset not found