An excited Belfast crowd set sail last night on a spacey odyssey with headliners Wooden Shjips, a niche but pervasive psychedelic quartet out of San Francisco. After a quiet night in the Empire the week before for drone rock brethren Matt Hollywood and the Bad Feelings, it was encouraging to see a packed house of buzzing admirers for this gig.

Local talent Cian Nugent kicked things off with his woodsy guitar melodies, putting heavy emphasis on the instrumental side of things. With sounds influenced by Indian spiritual traditions, Nugent created a sitar-reminiscent sound by plucking out intricate tunes surrounding a constant central pitch. The meditative music was a fitting opener to the mind-expanding musicianship that was to come with the main act.

Nugent’s songs would be as be as much at home on a road trip from coast to coast as they would be on an ayahuasca in the middle of the desert, performed in a stoic gait by the man who presented himself enigmatically as a lonely cowboy in crisp double denim. His lyricism was nice but quite simple—his real talent lies in the maturity of his expertly spun guitar compositions, which seemed to tell a wordless story in and of themselves. 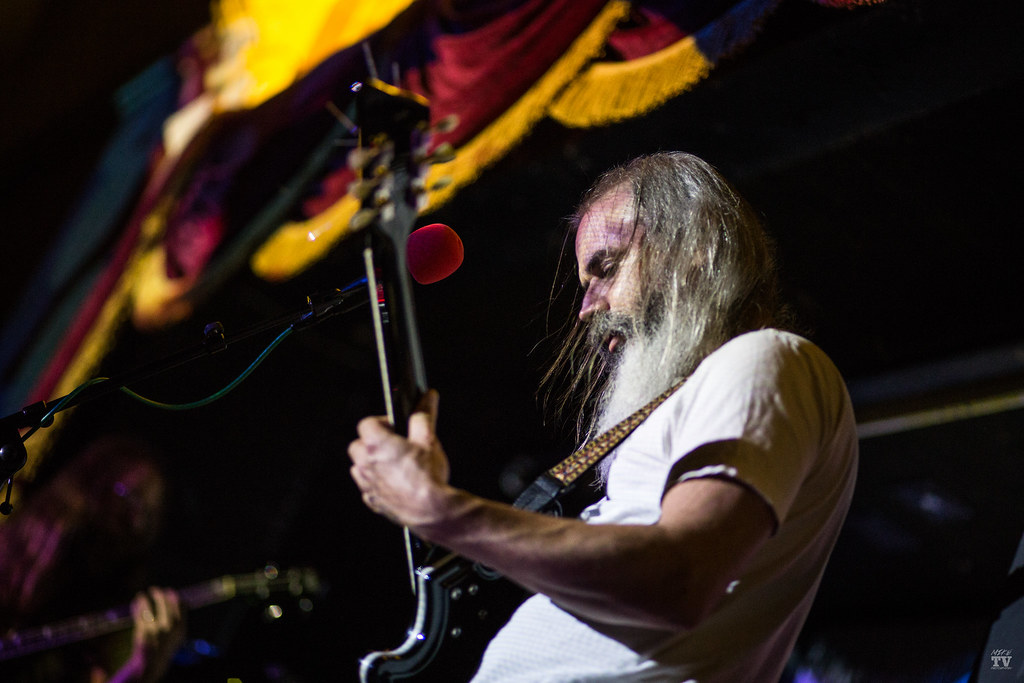 Wooden Shjips took to a stage submerged in darkness to sounds of an audience cooing and birds chirping. It was like the dawn of a new day of peace, love and rock ‘n’ roll as sunbeams of colour burst forth with the first few notes of a dazzling ‘Eclipse’. The group used the entire stage and themselves as a canvas for their postmodern tableau. With a warm guitar hum, gentle vocals, simple tight drumming, and a strong bass line emanating in the feet and the chest, the band quickly established a strong feeling of bliss.

By the second tune, an older “For So Long”, rung in by maracas and blinding black and white projections, the band already had fans in the crowd holding their hands to their heads, hugging each other in the sheer joy. There is a calm power to their music, and it seemed to have the band members locked in a trance equivalently. Keys and organist Nash Whalen was holding tones, eyes fixed to the ceiling, mouth agape like he was staring into the face of God, conferring with the divine in developing the sound. 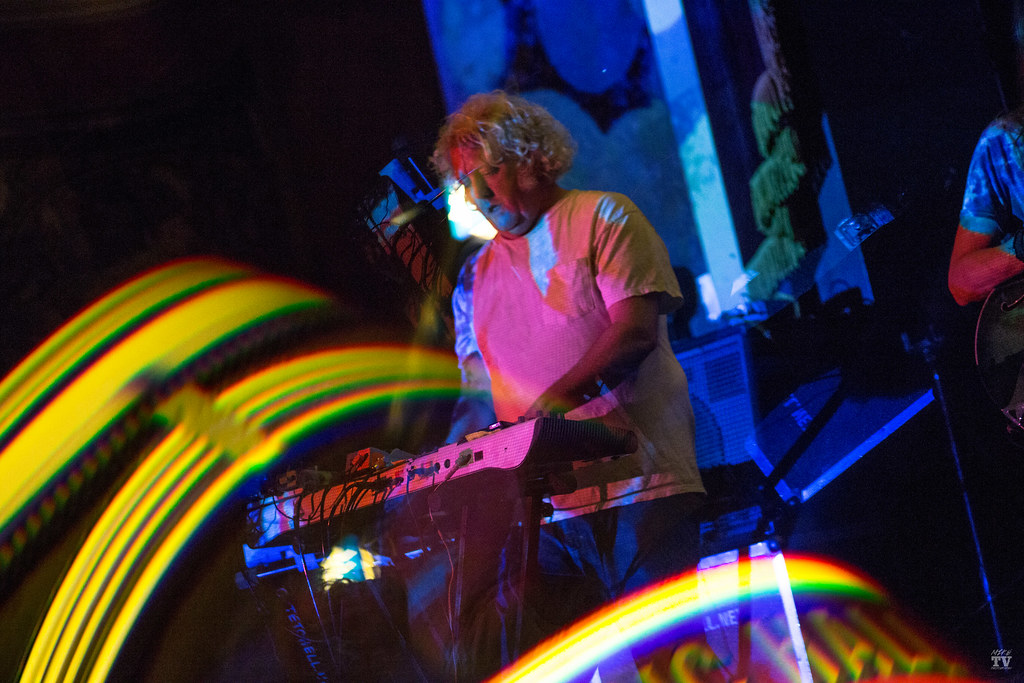 Visual static proved to be a consistent theme in the mesmerizing projections accompanying the set. It provoked thoughts of Wooden Shjips having spawned in a bored television universe, being trapped in a continuum of viewer-turned-consumer culture gone haywire. It was as if their revitalizing craft was breaking through the cycle of monotony like they were broadcasting their pure sound across powerful wavelengths. With the overlay of hypnotic visuals to complement each track, it became clear that this band seeks to put the music to the forefront. The trivial matter of delivering the perfect image and stage presence is unimportant.

Shjips’ brand of new age space rock brought bright hopeful tones with sufficient gnar to carry its own weight, showcasing a few tracks off their latest release “V.”, which has been toted as their most accessible album to date. This blinking technicolour daydream of a set had all the qualities of a psychedelic trip—awakening warm feelings with just an edge of dread. The group are certainly masters of the genre, showering the crowd with cosmic dewdrops—the genuine article with an inimitable sound that so many have tried and failed to replicate.

Hearing the group live was truly a uniquely enrobing aural experience, as the band inevitably whipped songs to stiff peaks—building, building, sending you flowing down the river, carrying you deeper into the abyss—with the dominion to weave such complex audio tapestries and send them skittering away just the same. The piercing guitar solos of Erik “Ripley” Johnson echoing through the driving drone was enough to send any soul to the next plane.

The overwhelming brilliance slithered into souls as concertgoers whose bodies couldn’t help but be wrested from side to side with the rhythm. Who could deny bassist Dusty Jermier tenderly tickling the strings and drummer Oman Ahsanuddin swimming in the groove? 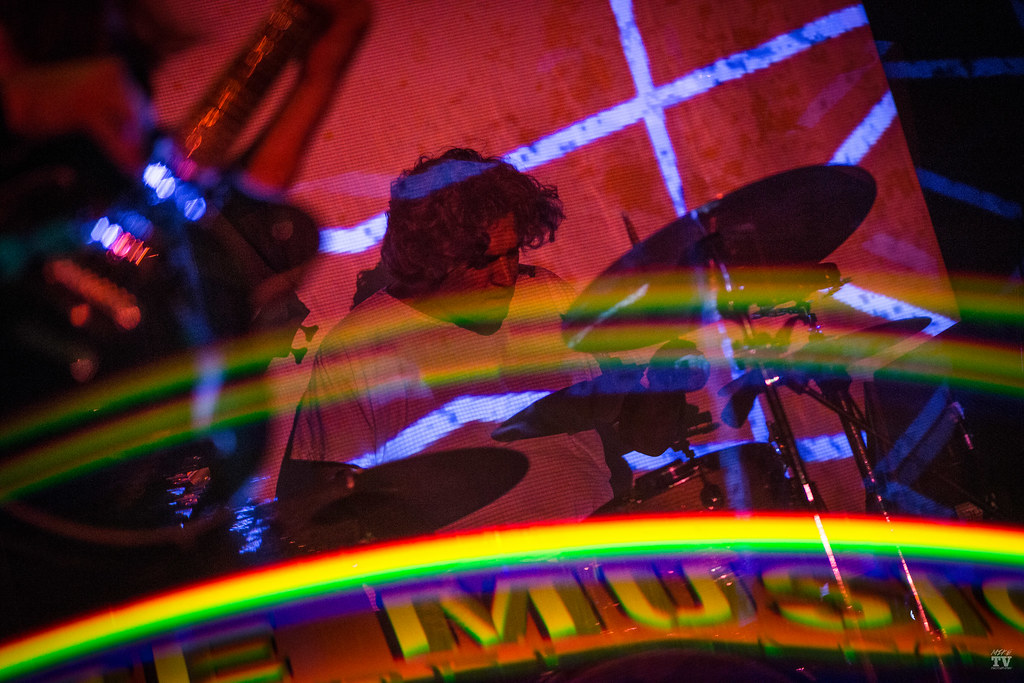 The repetitive nature of the tracks had the effect of sinking into a tar pit that you never want to leave. I think I got so stuck in this deceptive time warp that I was shocked when the band was suddenly filtering off stage to end the set after just nine songs—albeit nine rambling, jam-filled songs. It was like having to submit to a sharp reality. Thankfully the guys came back on moments later for a two-song encore, initiated by the love and star tunnel classic that is “These Shadows,” to tremendous acclaim.

Wooden Shjips Setlist:
Eclipse
For So Long
Other Stars
Ride On
Staring at the Sun
Flight
Ruins
Lazy Bones
Death’s Not Your Friend