Glen Hansard opened his set at the Orpheum theatre peacefully, a feat he would accomplish a few other times, and each time it took the audience a few moments to realize what was happening. The theatre had gone dark, and some bodies were barely visible shuffling about on stage, getting into position. Cheers rose from the crowd as Hansard walked to and stood alone at the front of the stage, barely illuminated by a distant, orangey light from somewhere far above. He was already singing, but you couldn’t hear it above the crowd’s cheering, and it was almost too dark to notice. Slowly, the room realized what was going on, and a rippling wave of silence overtook it, with just Hansard’s grainy, down-home voice trickling towards the back. He was not mic’d. The song he was singing was “Grace Beneath The Pines” off his newest Didn’t He Ramble album. After this song softly ended, he lifted a hand in a wave, and then joined his sprawling band (grand piano, cello, violin, drums, guitar, bass, three-piece horn section) behind him for “Winning Streak,” another new tune.

One of Hansard’s great strengths, beyond his obvious songwriting talent, is his grand storytelling. Didn’t He Ramble could not be a more appropriate album title for this man. Often, his stories seem to get away even from him, and when he realizes he’s been indeed rambling on some tangent, he will pause with an “…anyways…” and quickly wrap up to get back to the music. But half of the joy of going to see him live is to hear him spin these yarns, warmly regaling us with the stories behind songs, or events that relate to them, all the while interjecting his gentle humour and chuckling to himself while doing so. It’s hard to keep up with his tales so I won’t be relaying too many of them here. One of the greatest examples of this storytelling though can be found on The Frames’ live album Setlist, before the song “What Happens When The Heart Just Stops,” and you can listen to that here https://youtu.be/d9TJHV7Wc5M. Of course this was night one of a massive storm hitting Vancouver, like you go outside and are waterlogged immediately, and Hansard pointed out that,”it really is wetter than Ireland here.” He went back a little to “Bird of Sorrow” early on, demonstrating how his vocals can go from a soft whisper to a soaring roar. His songs are sweet, warm and powerful, often sad, often loving, usually touched by a certain hopefulness. His Swell Season and solo tunes are much more cinematic and sweeping in feel than the Frames’ work, which makes sense considering he was writing for film. No Frames material turned up here tonight. His singing looks somewhat effortless, even when it picks up to a holler. When he fades down to the soft parts though, you can hear a pin drop in the Orpheum. Everyone is so intent on his songs. He introduced “Stay The Road” by saying the song was for anyone who has ever been on a stage, who has loaded gear in and out night after night, wondering if this is all worth it. “I guess it’s for anybody who just… is tired.” 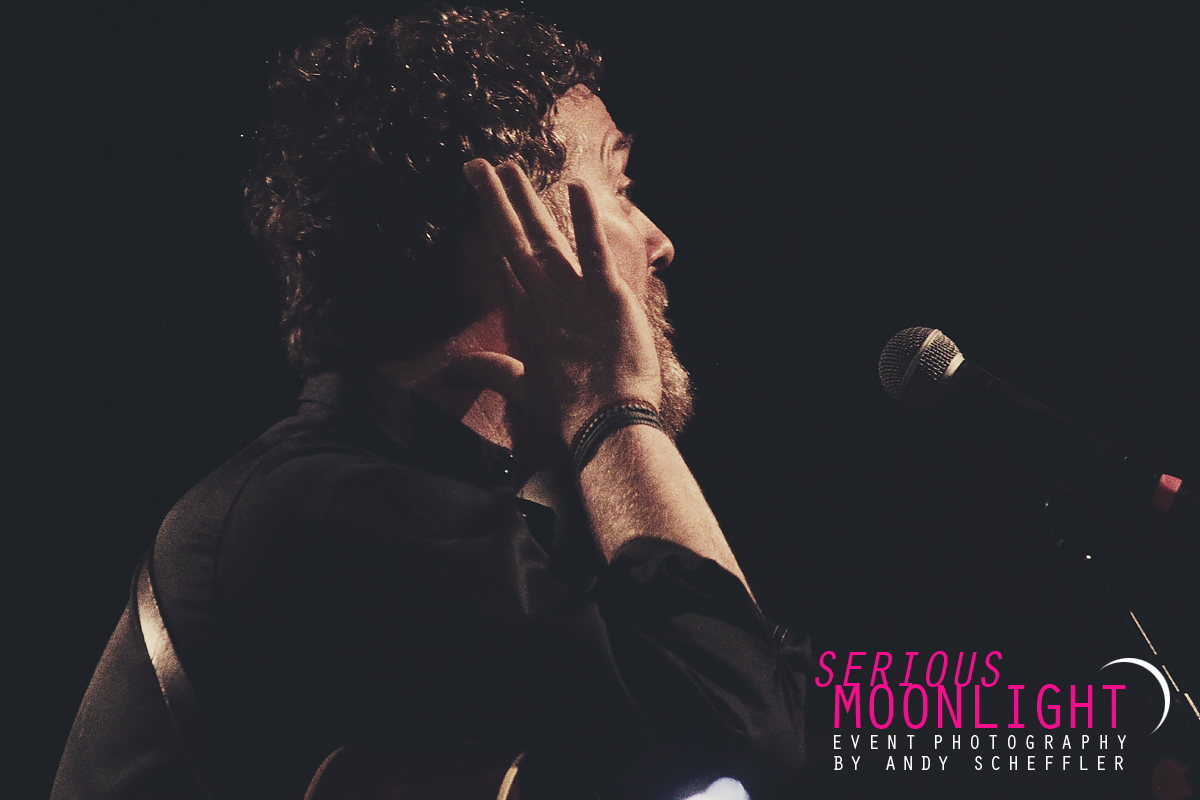 More than once, his storytelling centered around a friend of his who is “a really good friend, but a total disaster.” This happened so often that Hansard eventually admitted he probably only actually has one friend. Said friend apparently came up with a revelation one day, while in a deep conversation about love and how challenging it can be, that songs are proof that love doesn’t work. The audience laughed, and even Hansard now retelling this story seems completely befuddled by the comment. Somehow he meandered into a bit about how there’s this blissful feeling when you’re really hungover but have come to the realization that you’re not actually going to die. “My job is not to disgrace myself… well, it’s too late for that.” Rambling, rambling. He asked us to sing along with him for a bit, and the room complied. It was just a sort of “ahhhh ahhhh ahhh” bit, that he repeated for us a few times. “Just one more time so you remember. Oh that’s so nice,” he said as the audience ahh ahhhh’d away. “The intent is just right… think of a young, blonde Russian woman, leaning off the bow of a ship, heading into the port of a European town, bringing bad news… ahhhhhh. That’s where I am when I sing it.” The tune he was prepping us for was “Back Broke,” a Swell Season tune.

“This next song is for my dad, who was a very gifted and talented… drinker… It’s for anyone who ever worked a night shift. Or ever worked at all. I worked at a supermarket when I was a teenager. I stocked boxes, and I pushed trolleys to womens’ boots. It was there that I learned how to talk. To women. Older women.” This is how he led into “Paying My Way.” Shortly after he told another story about his disaster of a friend, whose name was Dave. Dave! I’m pretty sure I remember stories about Dave from Frames shows too! This was a big tale about “two bearded men feeling manly decided to go check on the boat in the harbour” that they had just bought. And then decided to take it out for a spin. In the dark. Towards a lighthouse. And around the lighthouse. “The lighthouse’s job is to say ‘nooooooOOoooooo, gooooOOOOOOoooo awaaaaaAAAAAAAyyyyyyy,'” he mimed the lighthouse light panning around. Anyhow, this adventure ended with them hung on a rock with a huge hole in the boat, and having to figure out a way to get the boat off the rocks, bail it out and get it back to the harbour, which they eventually did. “We tied up the boat, which then sunk.” The moral was that nature is ambivalent and doesn’t care about us at all. Hansard took a turn on the piano, while his violin player took a turn at the front, playing a soaring violin that suddenly turned into a zippy traditional Irish fiddle. That band was super energetic, when you swept your gaze around the stage to watch them. The three on horns were always doing little exuberant coordinated moves, the drummer was an absolute blur. Opener Aoife O’Donovan popped back on stage to sing. A great story accompanying “McCormack’s Wall” led into the bluesy and foot-stomping “Way Back In The Way Back When.” They ended the main set on “This Gift,” and then departed the stage to wild applause. 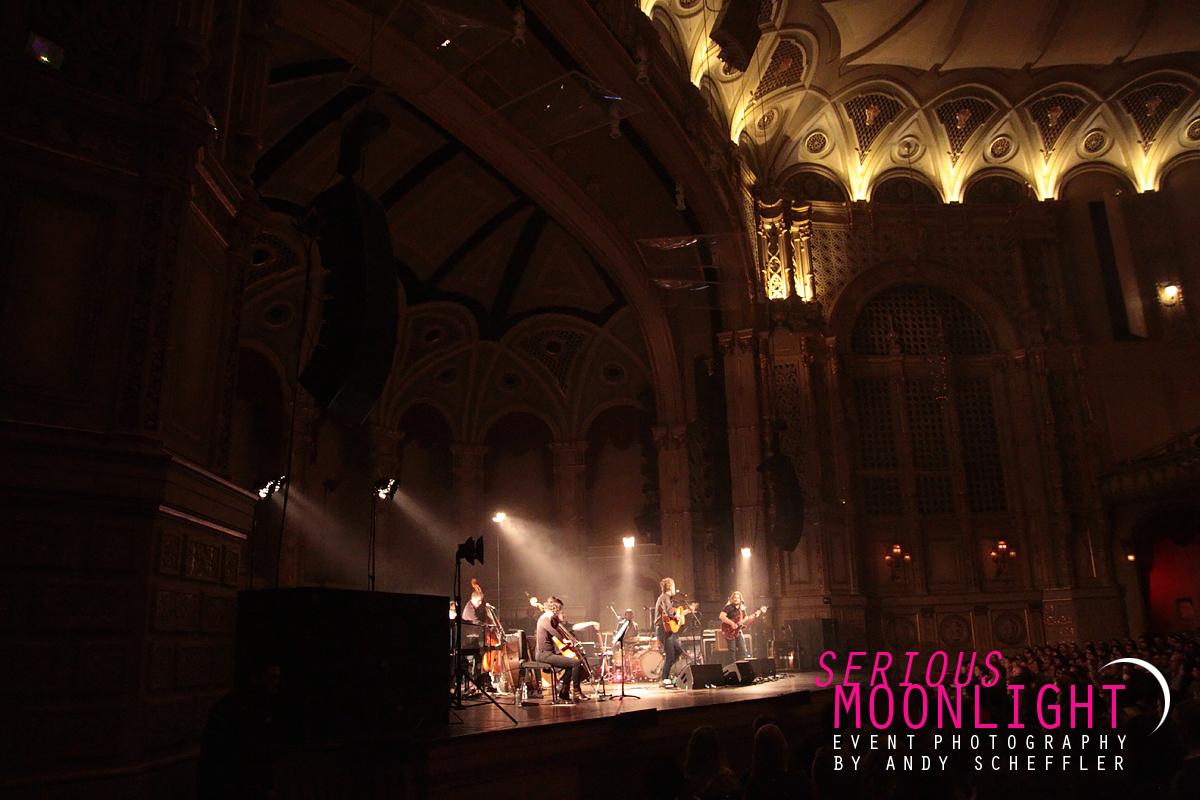 After a few minutes, people on the orchestra level (where I was) began to realize that Hansard and I think his guitar player (I couldn’t actually see the second person from where I was) were perched on the wall of the front of the balcony level above us, already into the beginning of another song. No one could hear him because half the room, on the orchestra level under the balcony and totally out of sight of Hansard, were completely not aware that he was up there and were still cheering for an encore. Finally one guy near me yelled at the top of his lungs, “Shut up, he’s on the balcony!” Instant silence, and a stream of people began winding down to fill the aisles near the front of the room so they could see him. He was playing “Say It To Me Now.” Someone shouted up “Freebird!” to him, which got the audience laughing again. He played “Gold” from the Once film/soundtrack up there as well, and then high-fived a couple of people seated by him and disappeared. A lot of people started to file out of the theatre, but they hadn’t turned the house lights or music back on yet. Surely more was to come. Hansard and band came back out on the stage. “This song is for a lady I keep buying pianos for, and she keeps giving them back.” The song was “Falling Slowly,” a song he originally sung with Marketa Irglova, his Swell Season partner and collaborator/costar for the material on Once, which famously spawned a bit of a romance between the two as well. I have no idea exactly how this happened, but partway through that song, the band’s guitar tech scurried out and pulled a girl on stage. I immediately thought with the people rushing to the stagefront now, maybe she was getting claustrophobic and just wanted to get out, but she popped up and went right over to Hansard and began singing Irglova’s parts from that song with him, and she did so stunningly. I mean, people suddenly were still in the crowd to listen. She took the lead a couple of times as well, but also seemed to suddenly realize what was happening and she took a step back, covered her face with her hands and wept. When the song was done, Hansard gave her a hug, could be seen asking her name, and then she walked over to the stage edge, as the audience roared, and the guitar tech flashlighted her path so she could climb back down. Hansard had a change of heart, walked back over to her and grabbed her hand to drag her back into the line-up where all the band members had gathered hand in hand. The audience was still going bonkers, waiting for a bow (as was I!) when we all realized… they were singing again! I appear to be the only person in the room who didn’t know what this song was because everybody sang along with it, but it sounded like a traditional Irish group drinking song where there’s a chorus everyone knows and then each person takes turns singing verses in between. It was really sweet. I can now tell you it is called “The Auld Triangle” and is an old Irish ballad about prison life.

Surely that’s it, right? I mean what an ending!

Nope, we’re not done yet!

They started into “Her Mercy,” and perhaps inspired by the other recent guest vocalist from the crowd, another lady bartered her way onto the stage and just killed it! At first she just stood with Hansard as he began the song, smiling, swaying, and laying one hand on his shoulder. Then she took the reins. What a powerhouse! She had a big gospelly, R+B voice, and eventually Hansard just backed off and let her sing lead. He went to another mic at the side of the stage and added backing vocals! It was wild – she did an amazing job. The audience again went suitably bonkers.
That was the legitimate end of the set, and what a night. Hansard managed to make a 2700-seat theatre show feel like it was being performed in someone’s living room – a warm, cozy set where he somehow connected everyone in the room to himself and to each other. The stories, the songs, the good-naturedness and the guest appearances… brilliant.